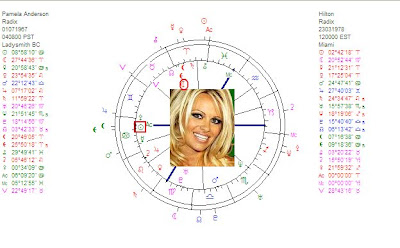 Pamela Anderson's appearance at the Millionaire Fair has not remained unnoticed. Perez Hilton wrote a sour blog about her body and this must have been uneasy for her to read. The consternation is demonstrated by the transit of Uranus inconjunct her progressed Sun on a solar transit - Uranus day. Here you see her chart and the positions of Perez Hilton on the outside. Notice that both have a prominent Sun (for drawing attention) and both have an aspect between Mercury and Mars (that sharpens the tongue). The positions of their Mercury's and Mars's are in conflict with each other. That is perfect symbol of accusations, discussions and verbal fights.

Pamela Anderson has the Moon rising before her starry Sun on the Ascendant and that Moon is trine Venus. This means that she is an attractive beautiful woman and that her presentation (ASC) is an eye catcher:) Her Sun is quintile Uranus for being controversial the creative way...And Uranus is quindecile her Midheaven so that there is a strong focus on being in the news.

All in all, her name IS in the papers again. And even in this blog:) It is a pity that Uranus inconjunct her progressed Sun tells us that this 'being news' has a big BUT.
Geplaatst door Astromarkt op 12:45 PM