It is almost Xmas. That makes me want to look at the charts of people born on December 25: Sissy Spacek, DJ Armin van Buuren, Anwar Sadat, Conrad Hilton and Karl Rove. The differences between their personalities and lives show that there is more than just sun signs! Their charts are below. There is another famous person born on Christmas Eve: the Austrian Empress Elisabeth (Sissy). Click for the earlier post dedicated to her life and to Romy Schneider who impersonated Sissy.

ARMIN VAN BUUREN
Armin van Buuren is a DJ born with a creative GOLDEN YOD between Mars, Jupiter and Pluto. Pluto is quintile Mars and biquintile Jupiter. He is not only active in music, but he also graduated in laws. Mars is in Sagittarius (for fighting the academic way) and rises before the Sun. That makes him first of all a fighter for justice. But there is also music…
Venus in Aquarius (sense of rhythm) is related to Uranus (sense of rhythm again!) and Neptune (artistic talents). His hour of birth is not known, but possibly his Moon is in the artistic sign Pisces.

SISSY SPACEK
Sissy Spacek is an actrice and you can see that in her chart. Neptune is in aspect with Venus in Aquarius and the Moon in Pisces. Venus is sesquisquare the Midheaven. That relates her artistic talent to her career.
Sissy Spaces has a Gemini Midheaven. Often ‘double signed’ Midheavens refer to more than just one career. There is another activity of Sissy Spacek. She is an activist for women’s lib. Mars and Uranus are angular in her chart and Uranus is on top. She is above all a person who wants to change the world, and she wants those changes ASAP!:)

ANWAR SADAT
Anwar Sadat was born with Pluto on the Midheaven, a strong statement for politics and power related to the career. Pluto is conjunct Jupiter and opposition Sun and Venus. This combination indicates great success and support, but as the Sun is opposition Pluto he might also have enemies.

KARL ROVE
Karl Rove has Pluto on top of his chart and he is above all a politician, a man using a strategy. Pluto is prominent in this chart with Jupiter angular and Mars calling: a combination for successes.
Politicians often have a combination of Mercury, Saturn and Pluto in their charts. It means that they will experience hard verbal confrontations, that they may lie because they have to, and that they are ‘die hards’ in communications. The combination refers to the strategic mind. Karl Rove has the same combination in his chart, in minor aspects.

CONRAD HILTON
Conrad Hilton founded the Hilton concern. Jupiter was the first important planet rising before his sun and that is the sign for the international and the traveler. He knew how to draw attention and lead a company (Sun was ‘calling’!, not making Ptolemaic aspects in sign or orb 5 degrees). He was charming and a diplomat, too (Venus was calling). 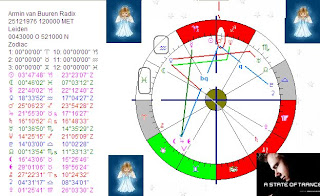 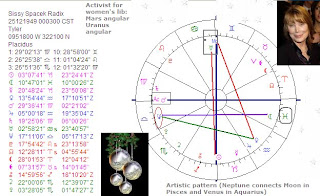 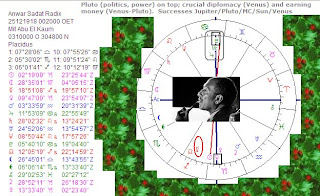 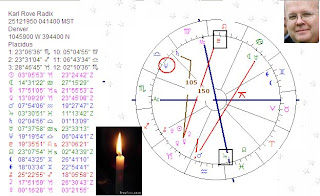 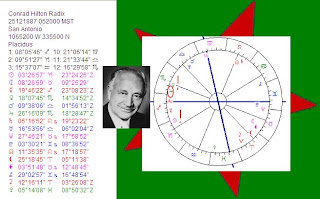