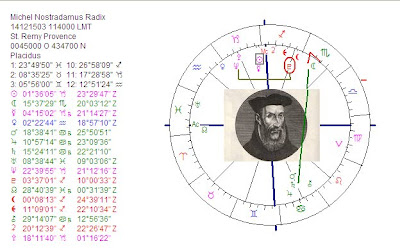 Michel Nostradamus was born December 14, 1503 in St. Remy Provence at noon. I wonder if that is true, but of course, it is possible. I will start reading his chart without taking the hour of birth into account. What you see is this:

1. Pluto is rising before the Sun (first of all: strategy or survival)
2. The tightest aspect is Moon trine Saturn (perseverence)
3. Sun is in Capricorn, Moon in Scorpio (the 'die hard')
4. Jupiter is opposition Sun/Neptune (a believing audience)
5. 50% of the positions is in water signs (going with the flow)

Using the hour of birth, there is also:
6. Sun on top (and square Aries Point) (leadership, show or 'performance')
7. Moon is sesquisquare Aries Point (an act)
8. Neptune is semi square Sun/Moon (arts, or religion)
9. The MC is between Neptune and Pluto (the paranormal field)

Maybe you noticed that Nostradamus was born December 14 and that his Sun is in Scorpio? The Julian calendar is the reason for the difference.

BTW: Nostradamus was wrong about having a French pope in the '90s of last century and he falsely predicted that a woman would be President in the USA (around 2000). (I very much doubt if he ever predicted THAT since their were no United States at the time that he lived). And I also wonder why he never predicted elevators, the growth of economy or the present financial crisis, or 09/11...
Even for Nostradamus predicting must have been difficult, especially when it was about the future. And the longer away that future was, less chance that people would have discovered that he was using his imagination about a future that he could not possibly see completely as he missed vital information about technical progress.

Pluto was conjunct his Midheaven one year ago and will soon be conjunct his Sun. And that could indicate an important, intensifying transformational and dramatic moment for his name and status. We will see about THIS 'prediction':)
Geplaatst door Astromarkt op 7:42 PM