The chart of the day of birth of Bernard Madoff 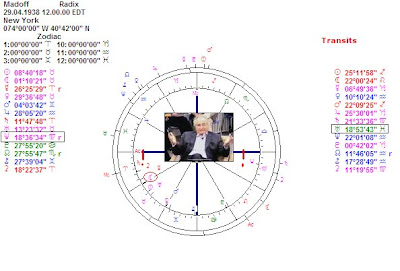 How to understand what Bernard Madoff did? Let us have a look at the chart of the day of his birth and see what the most narrow aspects tell us about the potential and characteristics of people born on that day. Of course they did not all gain and loose a fortune. Of course the hour of birth of Madoff would provide us with crucial material (angular placements, Ascendant, Moon position and aspects). It is information that is now missing.It is also understood that not everybody born that day had the opportunity and environment to do as Madoff did.
Still, there is a lot to see on the chart of noon April 29, 1938 (NY), the day of birth and the rise and fall of the man who was once the chairman of Nasdaq and is now considered to be a fraud and a criminal.

SATURN
Bernard Madoff has a prominent Saturn in his chart. Being respected must be very important for him, just like it was for Jerome Kerviel and Nick Leeson, two other men with an important Saturn. It is a different story, of course, but it is a story with the same nasty effect: people lost a lot of money due to speculations. They could, all three of them, only do this because they had the trust of many who trusted their money in the hands of people who were supposed to be perfect and who would multiply what they owned.

In January 2008 I wrote about Jerome Kerviel and Nick Leeson . Apart from the prominent Saturn, what they shared was Mars and Neptune rising before the Sun. Madoff has Mars quindecile 105 degrees from a 'calling' (not aspected) Neptune. It is possible that either Mars or Neptune has an angular position. (But without HOB it is unknown).

JUPITER AND NEPTUNE
The progressed charts of Kerviel and Leeson had Neptune in a hard aspect with Jupiter, right on the day that the fairy tale ended. Jupiter-Neptune is a combination for speculations that is also found in the charts of religious people and in the charts of idols. In other words: in the charts of those who have a believing audience.
The hard aspect might point at the negative consequences (Neptune) of arrogance (Jupiter). It is not in the transit and progressions of Madoff. Of course it is a different story. His own sons gave him in. But it IS in his natal chart:
Jupiter AND Saturn are related to Sun/Neptune in his natal chart: there were fans and followers and they was a heavily disappointed. Also Neptune is prominent in his chart and Neptune did not move in all of his day because of retrogradation, and later goin direct. That is why a transit with Neptune is a transit with both Natal and Progressed Neptune. At a certain moment in his life progressed Neptune was conjunct Natal Neptune. And that might have been the moment where things went wrong...

TOOLS
Other tools for fraud on the day of his birth are shown by tight aspects and combinations of aspects, like:

1. Being inventive and having insight in future development
Sun is quintile Jupiter and conjunct Uranus: being inventive! Jupiter and Uranus are 75 degrees away from each other: obsession about future changes

2. A die hard in telling stories
Mercury is biquintile Neptune and 15 degrees from Saturn: being creative in telling tales and and lying in an obsessed way Mercury is also square Pluto: for having strong opinions. Now watch this combination... it has the potential of being a 'die hard' (Saturn+Pluto) in telling tales (Mercury and Neptune)!

3. Deeply disappointing acts
Mars and Saturn are septile and Mars-Neptune = 105 degrees: inspired by wrong actions and obsesses by mistakes. The Mars, Saturn, Neptune combination has the potential of criminal acts. Neptune is as strong as Saturn is.

4. Easy earned money
Venus square Jupiter and sextile Pluto: great success in earning money. He had success when he started and gained so much that people started to believe in miracles.

5. Earth signs: the materialist
Fifty percent of his placements is in earth signs. That makes him a materialist.

RISE
When he started his firm in 1960 the progressed Sun was changing sign, right after being square to Jupiter and sextile to Pluto (an indication for success). Thirty years later this combination of aspects was repeated (in 1990)

THE END
Transit Uranus is inconjunct Progressed + Natal Neptune, transit Neptune inconjunct P Mars and the investors face the truth: they worshipped a person and he was only human. Solar Arc Neptune is inconjunct Mercury (having to give up on telling tales...). And I bet that there is more when his hour of birth is taken into consideration. WITH HOB we had more keys, but with this above you can easily see the man who wanted to make a career and who's capabilities were telling tales, earning money, being believed and being inventive. Unfortunately he also had the potential to do the wrong thing. And he did it.

CONCLUSION
In the right circumstances and with the right keys in hand this chart has the potential for earning a lot of money, possibly the wrong way. But only if you want to...
Geplaatst door Astromarkt op 7:45 PM