Everybody happy with Obama: Jupiter!

Everybody happy? It seems that over 80% of the Americans is happy with the way that the next president of the USA, Barack Obama, is doing. They are happy with the selection of his team, too. When everybody is happy with you, Jupiter is there! Jupiter is the symbol of content, progress and successes. Jupiter also provides you with good advices, good advisors and help is on the way when you need it. Jupiter is the 'positivo' of the planets. So when Jupiter is in contact with important positions in your natal or progressed chart, you can expect positive results. And transit Jupiter is making three wonderful aspects with the progressed chart of Barack Obama right now. There is a rule that I call 'the rule of 3'. When there are 3 indications, you almost cannot 'escape' the effect. Three indications coming from Jupiter is 3x hurray...You see the progressed chart here. 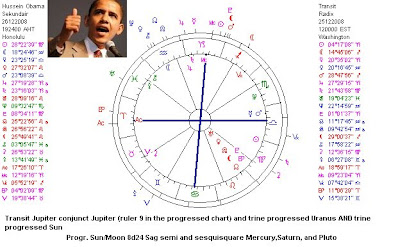 And please calculate with me: his natal Sun/Moon midpoint is 7d57 Cancer. On January 16, 2009 transit Neptune will be sesquisquare this midpoint, exactly! And Neptune is the most elevated planet in his chart. Maybe it means that he cannot smoke in his own house any more:) He promised not to smoke in the White House, remember? And Jupiter will be crossing his ASC soon, so that it is the perfect moment to improve his conditions. Read about the smoker in the chart of Obama...

For all posts about Obama, click the label below.

MIDPOINTS
For those who are not familiar with midpoint combinations, an explanation. You find your Sun/Moon midpoint by adding the length of Sun and Moon and dividing the sum by 2... (Sun+Moon)/2
It is simply the point in the middle of Sun and Moon.

Any hard aspects (conjunction, half semisquare, semisquare, square, sesquisquare etc) with this midpoint produces a midpoint combination. The 3rd planet of the combination colours the way that you live your life in your own personal style.

PS
Notice that Obama's progressed midpoint ASC/MC is changing sign in January 2009. It means that he is in the middle of a crucial period of change. And maybe so is the country...
Geplaatst door Astromarkt op 9:23 AM