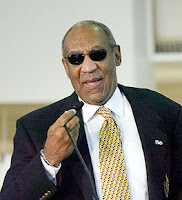 
The progressed Sun is changing sign and lately received transits from Uranus, Saturn and Chiron, reflecting periods ending. The natal Sun is inconjunct transit Quaoar, mirroring a new reality involving a lost. Transit Pholus is inconjunct Moon and IC for an emotional turning point with a lost involved...and more...Anyway, Cosby IS alive but he is not having much fun because of the hoax.

Observations listed:
a. Right now his progressed Sun is about to change sign.
That means that his life style is changing. *)
b. Last year’s transit Saturn conjunct his progressed Sun might have made him look older than before (at least for a while) and  perhaps ended a period in life.
c. Uranus transitted over the progressed Sun, too. This kind of transit often brings a person ‘ in the news’.
d. The combination of Saturn and Uranus tends to limit independence or cause obstructions, sometimes fysical…2)
e. The progressed Sun was recently inconjunct transit Chiron (and perhaps the messages about his death really hurt him more than usual).
Fact is that he is being confronted with the limitations of the length of life because of the hoaxes and that is not a pleasant experience.
f. Progressed Ascendant inconjunct Northern Nodes and sextile  natal Uranus perhaps illustrate a hype in the community, effecting him.
g. Transit Pholus is inconjunct natal Immum Coeli (IC): something starts rather small with great impact…a turning point in the condition (or status).
h. Transit Pholus is square natal Moon, ruler IC. This might mirror an emotional turning point.
i. Transit Saturn semi square natal Sun/Moon midpoint (limiting your motivation, depression).
j. Transit Neptune opposition progressed Venus: feeling sad because of others.
k. Progressed Pholus is exactly quintile progressed Midheaven. Maybe that creates a turning point in his career (and people start buying DVDs again, now that he is news, J)
l. In the progressed chart the Sun is almost exactly sextile Pluto, an easy challenging change. Sun-Pluto combinations make you want to come back and in a way Bill Cosby came back in the news…
m. Last but not least: Transit Quaoar inconjunct his natal Sun for shaping new realities with a lost involved (in this particular case: creating the lost of his life as a hoax).
Notes:
1)   The pattern of artistic talent in his chart is made by the Midheaven in aspect with Moon (trine), Venus (biquintile) and a wider trine by Neptune (conjunct Moon). Maybe he was in the right place to be able to use his imagination and creative communication skills.
2)   Own experience: with T Saturn inconjunct progressed Sun and conjunct Midheaven, opposition T Uranus someone close had to go to hospital after suffering from a cardiac infarction.
HOW ABOUT YOU?
Please remember (quoting myself):

Charts, transits and progressions mirror the actual situation, like the water in the fjord mirrors the hills. There is a difference between the mirror and the real situation (shaped and coloured by other elements than the mirroring water in the picture). Every astrological reflection needs knowledge of the material situation in order to ' read' the possible interpretation in real life.

In other words: consider circumstances, genes and age, always. The chart doesn't work ' the other way around'!
LINKS
*) Another example of a person who experienced a hoax about his death is Bobby Brown. Bobby Brown actually was in danger but is still alive today. Just like Bill Cosby his progressed Sun was changing sign during the hoax.
See the post of last April: http://astropost.blogspot.com/2010/04/bobby-brown-lives.html
See CNN: http://news.blogs.cnn.com/2010/08/02/bill-cosby-im-alive-now-please-cut-it-out/?hpt=C1
For more about Pholus, check the labels!