What is the astrological recipe for having many (more than an average number of) children? I think that it takes a combination of indications like:
- an important Mars (for production),
- planets in the 5th house of children
- and for enjoying it: Venus-Jupiter!
That is what I see in the example charts. Of course, it is important to know circumstances (where you live, what is 'normal'). In China you ought to have 1 child, and in other parts of the world women keep getting as many children as they can (wanted or not). I don't have their charts, unfortunately, but I have the charts of two persons in my Western world whose number of children was important enough to be mentioned in the press. The example charts are those of Nadya Suleman (14 children) and Rod Stewart (7 up to now). He is in the news these days, because he is expecting his 8th child in March 2011 (with Transit Saturn on his Ascendant). That is when he will be 68! 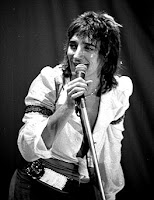 ROD
Rod Stewart has ruler 1 Venus in the 5th house of children, in a 157.5 d aspect with Jupiter (for more...) and on Deneb Adige (Alpha Cygnus), a fortunate fixed star for Venus-Mercury activities like singing. His voice enabled him to have so many children, to be able to afford them and have pleasure in it.

(He married three times. There is a post about multiple marriage on this blog where I mentioned double bodied sign and Venus-Jupiter aspects (scroll down for links).

To get married more than once, usually you have to divorce (or be a widower). Look at the chart and  see Venus inconjunct Neptune*) and square Uranus. And... Sun/Moon semi square Pluto.  And then consider the circumstances of a rich and sexy man with a lot of female fans. That explains...**) But, all in all he just loves children (and women:)...a lot! Jupiter multiplies the joy of Venus in 5 and promisses lots of pleasure and love. When it comes from women, the nasty thing is that there can be only one:). Luckily, you don't need to get separated from children to have more of them. So with a Venus in 5-Jupiter aspect: more children, more love and being loved... !
This Venus-Jupiter 5th house combination makes him enjoy having lots of children. The fact that the productive Mars is rising before his Sun is helping him to get them! (Click the link for more...)
Go to Art&Astrology for the artistic pattern in the chart... if you are more interested in Rod Stewart's talents for singing. The combination of Venus-Moon-Jupiter-Uranus-Neptune is a perfect combination for talent (Venus-Neptune), sense of rythm (Venus-Uranus), sudden success (Jupiter-Uranus), fans and followers (Jupiter-Neptune) and dream weddings (Venus-Jupiter-Neptune) with great popularity (Moon-Jupiter-Neptune) and sense of style (Moon-Venus). And of course: with devoted female fans:)

NADYA
Nadya Suleman has many children too (and an important Mars). See the post about her... and her chart here:


LINKS
Reinhold Ebertin said that Venus with Deneb Agide gives the ability to make money with artistic talents. Well, that seems to be correct in Rod Stewart's case..


For more about the asteroid Pholus (and more about Pholus and football) see the labels below.


About multiple marriages... and Venus-Jupiter on this blog, click the links.


**) Venus-Neptune is one of the four aspects in the charts of men, indicating possible divorce. Venus-Uranus is for adventures in love. The combination is often seen in the charts of pop singers,  who combine the sense of rhythm with artistic talents and who are more exposed to the ' temptations', perhaps. Sun/Moon-Pluto doesn't make family life easier...
(c) http://astropost.blogspot.com
Geplaatst door Astromarkt op 7:21 PM