Thinking about Mercury and Saturn

Mercury-Saturn is a combination of planets that links knowledge to prestige and seriousness while practice and realism joins the world of communications. It is the combination of the business and management of officially renowned knowledge. It is also the combination that restricts and limits knowledge to a certain area and to an establishment of students and their masters. Few people read scientific studies, unless it is related to their specific field.
Of course the effect of the Mercury-Saturn combination is stronger when an aspect is tight or the planets are prominent in the chart (on an angle, rising before the Sun or without Ptolemaic aspects).

Saturn is often oriental in the charts of those who do an official or classical study first, because their parents want them to or because they want to be respected and have a decent foundation for the career. People with Saturn oriental are conscientious, responsible and serious.

Mercury is the planet of the young, the adolescent and the student. With a Mercury-Saturn combination in the chart the time of making fun and getting to know others (a partner perhaps) is restricted, limited and loaded with a burden of books to read. It is hard to be young with a Mercury-Saturn combination in the chart, because of the disadvantages of being a student. But there is another possible explanation of Mercury - Saturn. Saturn is also symbolizing age or time or delay.

In the charts of scientists it is easy to see the how and why of Mercury-Saturn. It is also there in the charts of people who are limited in communications or transportation in general, because of fear or because their abilities to communicate are limited*). Dutch poet Ingmar Heytze (born February 1970 in Utrecht, time unknown) has a tight square between Mercury and Saturn and he has been afraid to leave his home town until recently (after treatment). Saturn is also the symbol of fear... 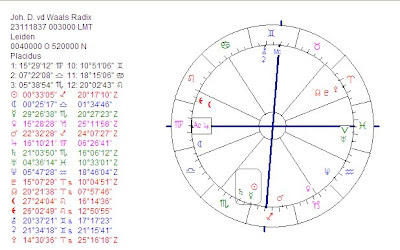 John D. van der Waals was a physicist known for his work on an equation of state for gases and liquids (the 'Van der Waals-forces'). He started his academic study at the age of 25.

In his chart you see Mercury (disposing of the MC) calling and oriental, in a narrow conjunction (out of sign) with the Sun. Sun and Mercury are a close unit, with Saturn rising before them, calling!.
The Sun and Pluto are sesquisquare and Pluto is biquintile Saturn.
Mercury and Pluto are sesquisquare, too.
There is not a direct connection between Mercury and Saturn. Pluto is the 'missing link' and Pluto rules the 3rd house. He was a teacher before starting his studies. 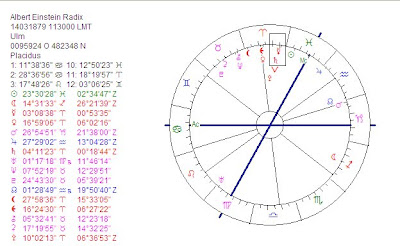 In the chart of Albert Einstein Mercury and Saturn are elevated and conjunct. That is symbolizing the fact that he was a scientist in a specific field. He is above all famous for his time related (Saturnal) message and ideas (Mercury). It seems that Einstein was not happy at school and that he felt the disadvantages (Saturn) of study (Mercury).

Einstein is famous all over the world. I like to contribute that to minor aspects of Jupiter and Pluto with his Midheaven (15d and quintile) and to the fact that Jupiter is rising before the Sun for the international orientation. This Jupiter in Aquarius is semi quintile Mercury and makes the Mercury-Saturn combination more tolerant towards new ideas. 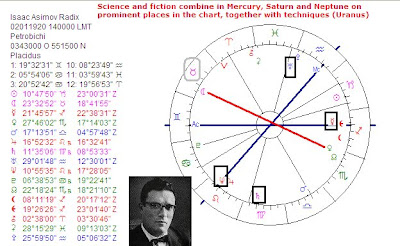 Asimov was a professor of biochemistry and the author of several books about science and science fiction. He has a unique combination of the planets of science (Mercury-Saturn) with fiction (Neptune) in his chart and used all of the charts capacities. He was first of all the famous writer (Mercury angular and rising before the Sun. Notice the sense of style, arts and beauty that is symbolized by Moon in Taurus opposition Venus.

MERCURY AND SATURN FOR THE 'COMMON PEOPLE'
In the charts of less famous people the combination of Mercury and Saturn might refer to lost contacts, uneasy younger years due to hard discussions with the parents, restrictions at school, or whatever background that thought them the hard way that it is better to 'manage' what they say. And when they travel (or if...) they have to think about timing more than others have to do. Because their is always a chance that the car breaks down, the tickets get lost or the message didn't arrive in time...Mercury-Saturn combination narrows the mind and sometimes people with a hard aspect combination just don't want to hear, read or say what is not 'by the rules', 'in the book' or coming from an official or authority and they limit their information to the sources that they consider apropiate. It is then, that a prominent Jupiter like in the chart of Einstein or an Aquarius Midheaven with Neptune in opposition like in the chart of Asimov is a great help to explore the world of ideas that lies beyond the 'books'.

PROGRESSED CHARTS AND TRANSITS
Mercury-Saturn combinations in a progressed chart often refer to moments of saying goodbye (sometimes due to moving to other places and voyages, but also in times of divorces when you loose contact with the friends and family of a partner). There might also be a mental depression or 'dip', depending on the natal chart.

*) A combination of Mercury-Saturn and Uranus sometimes limits the freedom to express an opinion.
Geplaatst door Astromarkt op 2:15 PM

Great article! Nicely thought out and makes perfect sense. I have a mercury/saturn conjunct in my chart, in capricorn and I've always felt held back socially! What transits or progressions could improve this?
But on the bright side I'm and amazing student even if I am a little lonely!

Thank you,Anonymous! About improving a natal Mercury-Saturn: in certain periods (indicated by progressive aspects) or in specific times/moments (transits) the Mercury-Saturn aspect might be 'colooured' by other influences. A progressed chart without the aspect,for example, offers opportunities for another way to communicate, learn or travel and for more interests. But there will always be a basic 'caution' (being aloof in contacts).

Nevertheless, there might be a lot of professional interaction in business or science. Of course, this is theory and other aspects and the reading of the complete chart are of importance!

Ah yes, I guess I'll take a look at it. I realized after I posted this that perhaps complicating things is the fact that my merc/saturn is square my libra moon. Which is in my third house, the house of communication! No matter, it is something that hopefully I can learn to deal with now that Saturn is entering Libra.

What a great article! i have a Gemini mercury in my 12th house inconjunct my Saturn in the 7th, and ive always felt like i have something like dyslexia or just difficulties with reading. Tom Cruise, Marlon Brando also have the aspects - 120 and 180 d. respectively. That is not a proof of course, just a note, but i strongly believe that there is a certain correlation between Saturn-Mercury aspects (esp hard ones) and reading problems. I also have a bad memory especially for numbers.

Mercury conjunct Saturn 6th house Sagittarius. This aspect plays out a lot for me in health and work related issues. Conventional school was not for me. At the same time, I am extremely bright. But that could also have more to do with my harmonious Uranus aspects.