Chart of the French revolution? 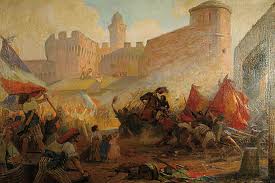 When does a revolution start? A revolution doesn't come out of the blue. The chart of a revolution is often the chart of a specific event in a period of revolt. So is the chart of the storming of the Bastille, on July 14, 1789 at about 13:30 (when the crowd started to fight) and at 17:30 (when the guards gave up).
Just like when the Egyptian people started to show their feelings of discontent about the government, Jupiter is conjunct Uranus in that French chart, and also with an orb of about three - four degrees. But that is the only resemblance in the charts. It is of course a completely different situation (even though France then and Egypt now was/is in an economic crisis) and a different event (up to now)...Let us hope that the aftermath is different, too, because what followed in 1789 was the period of Great Fear and the death of too many people by the guillotine.

This is the chart of the storming of the Bastille;it is the chart of a vital moment to remember, with Sun/Moon opposition Ascendant and the Moon exactly trine Midheaven. Uranus is square Ascendant and had been semi square AC/MC a few minutes before (or maybe the exact first moment was with an exact aspect of Uranus).  We see Mars binovile Pluto (for rejoycing the use of force). The revolutionary midpoint Uranus/Pluto is square Midheaven. Such a moment  exists every day and is characterized by radical change, something disturbing and often intense.
This chart just shows a memorable/emotional moment  for change and revolt on a day like every other day. It could have been any other day...So where is the revolution? I think that the revolt is in the Astro ID (Uranus square Ascendant and elevated, Mars rising before the Sun). Mars-Uranus is the combination of the short fuse and the rebellion, men working in a group, not the common soldiers (but more the sudden activists*). See the article on Astromarkt (follow the link).
Jupiter and Pluto are on either side of the Meridian. MC=Jupiter/Pluto points at success, a great moment.
It was great, because the crowd had success at that moment and place. But it was not the chart of the French revolution. That started before and ended later. It is also not the chart of the surrender of the guards (at 17h30). That is a chart with Moon/Neptune in aspect with Midheaven and an elevated Orcus. Governor De Launay died a violent death and the mayor was assasinated not much later. Several hundreds of others died that day. Hardly a moment to celebrate...

More soon about revolutions and Uranus...


*) When the Egypt prison was attacked and many criminals and terrorist had the chance to break out, it was with Mars semi square Uranus and conjunct Sun.
LINKS
http://en.wikipedia.org/wiki/Storming_of_the_Bastille#cite_note-4
Also visit: Astromarkt.net
Geplaatst door Astromarkt op 12:17 PM