BBC reports that the''Turing papers have been saved for the nation". Here is more about Turing and his chart. Alan Turing was a mathematician, logician and cryptanalyst. A lecture about cryptanalystics and spies introduced me to Turing and his fascinating story. We owe him a lot because he broke German ciphers during WWII using the Enigma machine, one of the first steps to computers. However, there was no gratitude of the authorities, since they prosecuted him for being homosexual.He underwent chemical castration. Gordon Brown appologized in 2009 for the way Turing had been treated. His death is named suicidal but his family doubts that. The memorial of Turing pictures him with an apple in the hand (he died after consuming a poisoned apple). 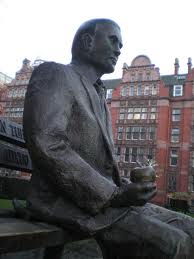 Alan Turing was inventive and a generalist. He had a special kind of chart with 6 'calling' positions in the natal chart (Sun, Mercury, Jupiter, Saturn, Uranus and Neptune without major aspects in sign or orb 5 degrees). Jupiter and Uranus (symbols of the inventive mind) are angular, with Pallas (symbol of patterns)...That means that he is inventive in finding patterns.His death is named suicidal but his family doubts that. Minor aspects between Mars, Saturn and Pluto tell us about the unnatural end of his life. Continue for  the charts (with transits and progressions for the day of death) and the relevant links to the news and the posts.

The progressed chart is here: