Chart without hour of birth!
Nessus is a quite recent object in the astrological chart. The myth of Nessus is that of a centaur who assaulted the wife of Hercules. Hercules shot him, but when he was dying Nessus gave his shirt (and blood) to Hercules'wife saying that if she gave it to Heracles, he would never be untrue to her. He wouldn't, because he died. The blood was poison for him. That is the myth...There is not enough experience with the transit yet, but very often it seems to be mirroring the boomerang effect (either way), revenge after death (Nemesis) or the intense influence of someone of the past. 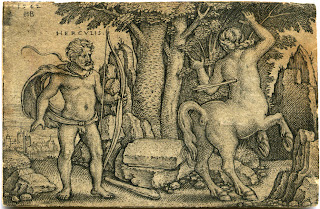 The charts of leaders often have a 'calling' Sun (a Sun without major aspects in sign or orb 5 degrees). Moammar Al-Quadhafi, Libia's leader (still...) is no exception. In his chart we see Saturn rising before the Sun (ambition, hierarchy, management) and this 'calling'Sun for leadership.

Moammar al Quadhafi (or Gadhafi)'s progressed Sun is now in the 22nd or 23rd degree of Leo, that is soon opposition transit Nessus, now almost in the 22nd degree). See the progressed chart and transits here:

Of course there is more that is reflecting problems, like  transit Pluto quindecile progressed Sun (obsessed survival? danger), for example and progressed Mercury conjunct natal Saturn (that is a symbol of departure of final decission/separation and of hard decissions, too). Unfortunately the hour of birth is unknown and that is limiting the observations.
But let us get back to Nessus.

Quadhafi became Libia's leader on January 15, 1970.That was with transit Jupiter exactly square his natal Pluto (a sign of success) and... opposition Nessus. There he is again: Nessus. Just a quick observation...

NESSUS' NAME
Did you know that Nessus got his name thanks to the cooperation between astrologers and astronomers in the 90s? One of the astrologers who suggested the name was Zanestein (see link below) and the astronomers name was Brian Marsden*). Later he was the first astronomer who suggested that Pluto should not be a planet but a dwarf planet. And once he caused a false alarm about a comet.That was when his progressed Uranus (symbol of upheavel and alarms!) square his natal Sun. So you see: Uranus works, even with astronomers!
http://en.wikipedia.org/wiki/Brian_Marsden

You can find out where your Nessus is and where transit Nessus is today by using the http://www.astro.com/ chart calculator (adding Nessus, one of the extra objects in the list on the left below). Your experiences with or stories about Nessus are welcome!

Pholus is another Centaur and asteroid. See http://www.astromarkt.net/index.php?id=100

Hello,
Very interesting astrological site!
Could you point out the following:
What could be a meaning of Nessus
transiting (3x!) conjunct natal Pholus, in Aquarius in the ninth house?

Hi Paul, I don't know, but revengeful turning point or the implementation of a boomerang effect could be a possible 'translation'. However, I doubt that such an aspect without other indications and without prominence or link to more personal positions in the chart can mirror a real event. But again. I don't know, never studied this aspect. Txs for your comment!:)