Part of the 'joke' is that the company used the 13 signs of the astronomers (that is to say: the constellations, instead of the astrological signs). These 13 constellations used as sunsigns give uneaven signs (with different numbers of 'sign members'). For example, the number of accidents for Virgo (constellation, not sign) is that high because of the width of the sign and the number of ' Virgo's' (those who are a Virgo according to astronomers, of course, not astrologers!).
Well, there IS a post (posted in 2007) about figures for the good old astrological signs here. The results of a study by a Dutch insurance company about deathly accidents in traffic and sunsigns were clear.Results of 2003 (published in 2005 in the Dutch newspaper Telegraaf):

Capricorn is the most carefull sign! But it might just be coincidence for one year.  Is there any insurance company brave enough to publish real figures for the astrological signs these days? And if they do, can they also give a list of the most frequent tight major and minor aspects in the charts? Thanks in advance:)!

The poll with the question ' Should the signs be renamed' shows that almost all of you don't want other names, not even if the astronomers keep mistaking  'our signs'  for their constellations. So perhaps it is a better idea to rename the constellations, LOL:)! Good idea for the next poll? I already found a new constellation today...!
JUST KIDDING....
If everybody is naming and rearranging sunsigns these days, why not have a carsign, too? I don't want to upset astronomers, but their constellations carry the names given in a long gone history (probably by astrologers, even! oh dear). Those names haven't changed, but the world and our concepts changed! We still have to work with old fashioned names of constellations and we miss modern ideas! However, these bright lights can be connected either way, so that we get a modern sky, one with cars and computers and rockets, for example. I already noticed the carsign 'Speedy' today (see the picture). May I suggest that they consider renaming and refiguring the constellations? There is really not a snake at all, you know and no one who carries the serpent! It is all imagination! Draw another line and you get that car! 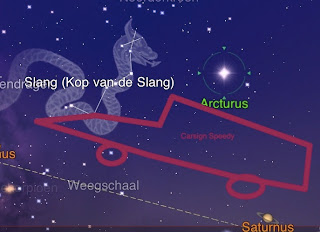 Also visit: Astromarkt.net for example about the study by Carter...

BETTER PRESS WANTED?
If you are British, you may sign the petition meant for the BBC. All nationalities: see 'Recommended' for a way to support the launch of the  project of Tony White (about Nicholas Culpeper, the astrologer, a respectful portrait).
Geplaatst door Astromarkt op 1:20 PM