Transit Venus and Jupiter, a wedding and April Taurus 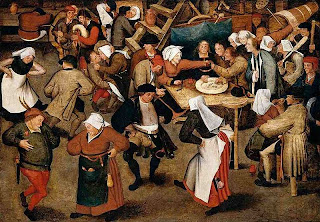 Recently I was called by a family member. He had proposed to his friend and he would inform me about the wedding date soon. I know that he has Ascendant opposition Venus in the progressed chart right now. After he told me about the wedding date I had a quick look at the prognosis for Taurus (he is a Taurus; I mean the astrological one:). You know that  Venus-Jupiter is the combination of two symbols of joy and fun? Together they are the recipe for a party. In the prognosis for sunsigns for 2011 I wrote a special message for the April Taurus: the best time  to plan a party was end of August (when Venus and Jupiter is on the side of the sunsign Taurus). That relative of mine is NO fan of astrology. He is a Taurus, born in April. He told me that he planned the wedding party ...on August 26. He did that without reading the horoscopes for 2011.

Apparently some people just do the right thing at the right moment:).
BTW I especially recommend August 30 for those born on April 30. Venus is trine Jupiter and transit Venus will be trine the natal Sun and transit Jupiter will be conjunct the Sun. One of them is the Swedish King (Carl Gustaf) who desperitely needs a party after transit Saturn square Sun (see the link).
LINK
Results of the query for astropost + Venus Jupiter:
Also visit: Astromarkt.net for example the 2011 horoscope for Taurus.
Geplaatst door Astromarkt op 7:37 PM