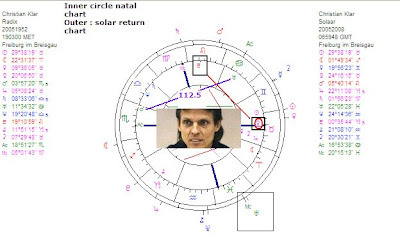 Christian Klar will be free in January 2009 and see...his solar return chart for this year has Uranus (planet of freedom and independence) is on the Midheaven!

In his natal chart the prominent planets are:
Pluto (on top, square ASC)
Venus (oriental, conjunct DESC)
Venus is BTW exactly square Pluto and Venus is end dispositor of the Midheaven
Sun is calling!

Pluto on top for politics and power. Mars is quindecile (75 degrees)from Pluto for the potential of using and abusing power or violence in an obsessive way. And we see a conflicting desire for power and money (Venus square Pluto). Venus with Pluto always intensifies sympathies and antipathies. The combination of Venus, Mars and Pluto shows intense passion.
The issue of the value of money is very important in the life of Klar. Recently (last January) he strongly argued against capitalism.

MARS-URANUS: TERRORISM
I found the terrorism (Mars-Uranus) in the distance between Mars and Uranus (112.5 degrees, in the 22.5 range). Having an aspect between Mars-Uranus, repeated midpoint combinations with Mars/Uranus or having a prominent Mars and Uranus seems to be the necessary tool in the charts of freedom fighters, terrorists and extremists. The aspect could however also be useful in the charts of sportsmen and sportswomen. More about this aspect on my site Astromarkt.
Mars is connected to both Uranus and Pluto. This combination often leads to radical or impulsive action.

CONCLUSION
Politics, influence, money and making strong and intense choices are as crucial in his life as the drive to make dramatic changes right away. In his field he is leading or drawing attention.

I value the half semi square and the other distances in the 22.5 dial. I name them half semisquare (22.5), and sesquisemisquare (67.5) but I have not found more names yet and I am still searching the net. It is complicated to read these aspects, but on a certain level they contribute to the complete picture. Of course, the planets need to be significant in the chart or in the progressions in order to take them into account.

Alfred Witte used the 22.5 degree dial for the first time. It is a 'frustrating distance'.
The Mars-Uranus connection with the ASC/MC midpoint could be read as the very crucial impact (ASC/MC) of the drive to make changes right now (Mars-Uranus).

For more examples, use the labels below
Geplaatst door Astromarkt op 6:36 AM