Charts of Obama and his grandma 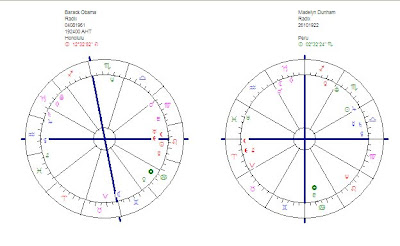 Barack Obama's grandma died (see earlier post). Her name was Madelyn Dunham and she was born in Peru (Kansas) on October 26, 1922. She was the mother of Obama's mother. She took care of him from his tenth birthday on. In the four years before Obama lived with his stepfather and mother in Jakarta (Indonesia). Madelyn was his second mother. She was a rather tough and ambitious person. She was the first female vice president at a local bank.

Madelyn was a Scorpio with a Capricorn Moon and Saturn square Pluto. Pretty tough, IMO:) A real 'die hard'. She also was a positive person, an international, someone who wanted to progress in life (Jupiter rising before and conjunct the Sun). Her Neptune opposition his Ascendant refers to the 'sacrafices' she made for him. And Saturn semi square his natal MC indicates the responsibilities (parenthood) for his position in life. Quote:

"I can no more disown him than I can my white grandmother - a woman who helped raise me, a woman who sacrificed again and again for me, a woman who loves me as much as she loves anything in this world, but a woman who once confessed her fear of black men who passed by her on the street, and who on more than one occasion has uttered racial or ethnic stereotypes that made me cringe."

Her Pluto (symbol of life and death, power and influence) is now conjunct the progressed IC of Obama (opposition his Midheaven). Maybe her qualifications stimulated him in his ambitions.

TRANSFER/TRANSFORMATION
Her progressed Sun was in the final degree or the first degree of a sign now that she died. The changing sign of the progressed Sun usually indicates a period of transforming life style. In the charts of very old or ill persons the progression into another sign often means the transformation to 'another life' or': death.

On Wikipedia more about the grandparents of Obama...
Geplaatst door Astromarkt op 4:47 PM