On my site Astromarkt I once published an article in Dutch about the natal chart of Hitler, the man who had one ball short (yes, we know for sure now).

In that article I wrote that with 50% of the positions in earth and none in water, you could easily see that he was rather 'hard'. Without placements in the water signs you can nevertheless be very sentimental about small issues, and it seems that Adolf Hitler was too.
I wrote that the combination of the ambitious Moon in Capricorn with the persistent Sun in Taurus could eventually lead to a rise in position. And that the Moon in the 3rd house sometimes CAN lead to prejudice (having your opinion determined by the changes of the day and the group you belong to). And I wrote about Mercury conjunct Descendant and without Ptolemaic aspects in sign or orb 5 degrees. This 'calling' Mercury means that this is the chart of a communicator (and a sometimes unreasonable one). You can try to read the story on Astromarkt..., or ... you can have a quick look at the chart using the method that I describe in my book Astro I.D. *), the short way: 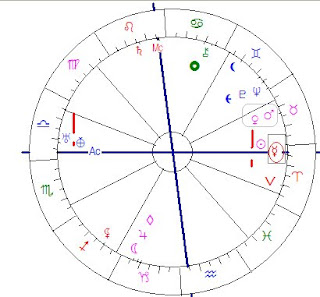 Sun and Uranus are calling**), Mercury is angular = crucially rising before the Sun...
That tells us that we deal with a : controversial - URANUS - communicator - MERCURY - and leader - SUN -. or someone with controversial opnions that are being noticed.

It is also a tough man (much earth, no water) with a passion (Venus-Mars conjunction). Politics are to be found in the link between Pluto and the midpoint Sun/Moon that shows that he is a politician in heart and soul and that he has the need to be influencial, powerful, rich or ...sexy. BTW, Pluto is in the 8th house of sex,life and death and problems. In this case, with Pluto in the 8th house, problems with sex and power. And that brings us back to the first alinea.

PS Pluto is tightly sesquisquare Uranus. The combination of Uranus and Pluto often cause immediate changes or force those kind of changes.
PPS Notice that Ceres (not in the drawing) is on top of this chart in the 29th degree of Cancer. That makes you think about the symbol of Ceres. Just click on the label below this message to find more about Ceres.

RELATED
Conspicuous by absence, about missing elements, and unaspected planets
Mercury at work

*) Astro I.D. is available in Dutch only
**) 'calling' refers to: not making aspects in sign or orb 5 degrees
Geplaatst door Astromarkt op 10:23 PM