In the earlier post about Sissi of Austria I mentioned the suicide of her son Rudolf on January 30, 1889, together with his mistress, Maria Vetsera at Mayerling Castle. The story of their suicide is in my memory thanks to the ballet that I saw long time ago.

Just like his father (Franz Josef), Rudolf seemed to prefer young women, because Maria was only 17 when she met him (30). In those days marrying older men was more common than today. But in this case his age and status was important for the relationship. And...he was already married.
Her Saturn is square his Venus. His Saturn is on her Midheaven. And THAT makes me think of his guilt (Saturn) related to her end (IC/MC). It is assumed that he shot her and then himself. Both left notes to explain the suicide. 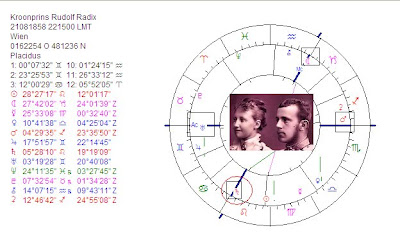 Who was Rudolf? Saturn oriental and opposition Moon-MC, Uranus conjunct ASC: it is easy to see the need to break free. With Mars opposition Uranus and ASC his short and hot temper drove him into the arms of many women, to comfort him as a compensation for the fact that his grandmother had a hard hand of educating and that he was separated from his mother too young and too often (Moon in Capricorn calling for 'calling' needs). Bad memories of his early days complete the story (Saturn near IC). Venus, Sun and Jupiter were 'calling': there was a potential for being a party animal at any possible level. Imagine that in those days!
He had a venereal disease, scandals seemed to follow him and there was a broken relationship with the German emperor's son about ??? That impressed him very much and lead to the end of his military functions. Nobody knows why.
His progressed Moon inconjunct Saturn on the IC reflects the existing Moon-Saturn opposition on the IC-MC axis and activated (apparently) a bad mood and bad memories.

DIFFICULT TIMES ACTIVATING DEPRESSED FEELINGS
Pluto and Neptune were at that time close to the Ascendant of Rudolf.
In January 1889 Rudolf's Ascendant and MC had recently changed sign and his Sun was moving to the next sign within 2 years. A period had ended. He was in a negative situation (Neptune was on his Ascendant - maybe he was under influence (drunk or using drugs). With Pluto opposition Mars and conjunct Uranus in his last days his explosive nature was tested after a stressful situation (transit Pluto on the ASC). But there was ONE fortunate aspect. I don't like to be cynical, but Jupiter was trine his natal Sun. And Jupiter rules his 8th house of life and death. It must have been an easy way out of several problems (venereal disease, for example). 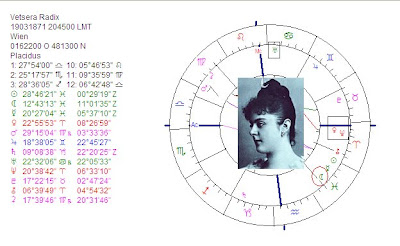 There are no progressions of that kind in the chart of Maria. On her last day Maria Vetsera had transit Saturn exactly square Pluto with transit Jupiter square Sun and Mars. With Sun and Moon in Pisces she was romantic enough to follow the plans of Rudolf, perhaps. Her Sun inconjunct his Sun tells us that they were not two of a kind. She was a child, he was much older. In her natal chart Moon is oriental, Mars is opposition Aries Point and Uranus is on top. Perhaps that is the key to the radical action. Moon oriental and Venus opposition Ascendant, tell us that she looked very good (Uranus exactly square Venus) and we can see it on the picture in the chart. Time to ask the main question (WHY?) and trying to find the astrological answers that will never be confirmed by the persons involved.

Why did they die together?

Is it because of the oriental Pluto on top of their composite chart, with Mars on the IC? Is it because in HER chart Mars and Uranus were as prominent as they were in his? Or was it because his Saturn was on her Midheaven? The combination of the three seems to have been enough:


1. Mars-Pluto for use of violence or the impact of sex in their relationship,
2. Mars-Uranus for shared tendency of acting on impulse,
3. His Saturn-her MC: his status linked to her position in life (and death).