Ian Fleming was born May 28, 1908, at 10 past midnigth in London (Mayfair). He created James Bond. In his birth chart you see the angular formula for successes: Sun and Jupiter are prominent in his chart. He had but a few years to enjoy it. 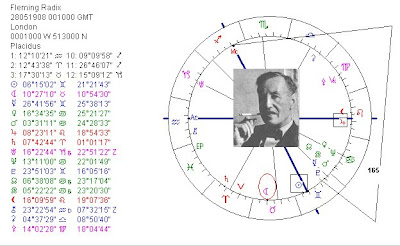 The writer in this chart can be found easily. Mercury is the final dispositor of th the MC-routing (through Jupiter in Leo, Sun in Gemini, Mercury in Gemini). and watch the pattern:
Mercury is conjunct Pluto
MC is quindecile Pluto
Being a writer is strongly connected to politics, danger, power and force.

The tighest aspect in his chart is Venus conjunct Uranus (love adventures). I liked to find on Wikipedia that he started writing about Bond with his marriage. He married late - in his forties -, afraid to loose his adventurous and flamboyant life style. So he created an alter ego who could do what he could not do as a married man...That explains the Bond-girls! And Venus-Uranus is an indication for the love for adventures and tension.
Geplaatst door Astromarkt op 10:34 AM