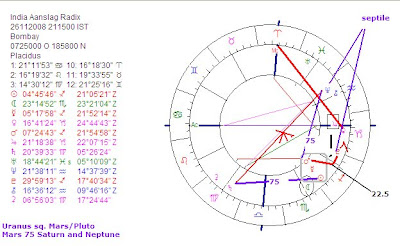 An event chart draws the picture of a moment in time with a range of possibilities or potentials that need not happen. But most of the time, IF something happens the event chart corresponds with the event. The terror at Mumbai is astrologically represented by minor aspects and midpoints in what I name 'the chart behind the chart' and in particular by: Uranus square Mars/Pluto and 75 degrees from the midpoint ASC/MC. The midpoint of Ascendant and Midheaven is the only true astrological connection to the place of the event, Mumbai as this midpoint corresponds with the latitude and longitude of a place on earth.

CHART AT FIRST SIGHT
At first sight, this chart is the chart of an international gathering of people in times where money or politics are somewhat 'uncontrolled' (as Pluto is 'calling'). Jupiter happens to be the symbol of hotels and travelling and the Moon of housing. Both are important in this chart (Jupiter angulare, Moon rising before the Sun).

CHART BEHIND THE CHART
At second sight you see the importance of the position of the dispositor of the MC, Mars in 22.5 degree aspect with that calling Pluto. Mars-Pluto is the combination for using force and for political struggles. And Uranus is exactly square the midpoint combination of Mars and Pluto. Uranus is always there when there is news. And news mostly is not pleasant.

Mars-Pluto's aspect is valid for all of the world at that moment in time. Uranus square Mars/Pluto, too. The only connection with Mumbai would be with the cross of the chart (ASC and Midheaven). And that connection is there: midpoint ASC/MC is 3d45 Gemini.That is exactly 75 degrees away from Uranus = Mars/Pluto.

Above is the event chart of the moment of the first attack in Mumbai showing 'the chart behind the chart'. Notice the active minor aspects (Sun-Saturn 75, Mars-Neptune 75, Saturn-Neptune 150) and midpoint combinations (Uranus almost exactly square Mars/Pluto for the potential of radical action). And compare the chart with the one below, showing only the major (Ptolemaic) aspects. 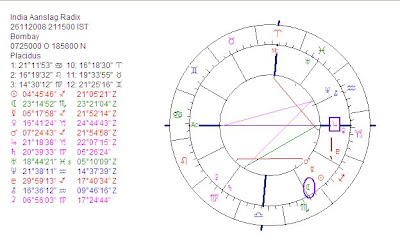 At the same moment somewhere in Mumbai there might have been a party going on, people celebrating their birthday or wedding. But there is a potential for violence (is not there always?). That potential is shown in the tightest midpoint combination of the moment: Uranus square Mars/Pluto (rebels using violence) and in the minor aspect Mars 22.5 (half semi square) Pluto.

Another observation is that Pluto (in the final degree of Sagittarius) is 'calling' (not making Ptolemaic aspect in sign or orb 5 degrees). Pluto is the dramatic component in event charts, pointing at the use of force, power or politics. I dare not hope that this was the final case of religious fanatism. But this one will be remembered because of the amount of the killed and injured people and because of the international effect with so many tourists involved. Also the attack was committed by foreigners. Jupiter is exactly on an angle for 'the crucial international' component.

To me it seems that the 'chart behind the chart' holds the key to not very obvious information that becomes apparent at the moment that something 'triggers' the potential. On the other hand, this event must have been prepared and coordinated a long time ago. One might wonder why the terrorist choose this moment and day over others and what relationship there is with this moment and the charts of the terrorists, like there was with Atta and September 11.
Geplaatst door Astromarkt op 12:09 AM