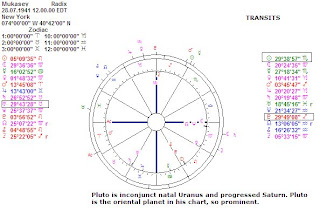 On July 28, 1941 in the Bronx, Michael Mukasey was born. He grew up to be the USA Minister of Justice. Today he suddenly collapsed. I don't have his hour of birth, that might give more detailed information. Nevertheless there are a few indications for a sudden change and shock (with Uranus as the symbol reflecting the situation):

Given his natal chart, Mukasey is first of all a fanatic and strategic politician (Pluto for power is rising before his Sun) and diplomate (Venus is not making aspects in sign and is 'calling'). Mars sextile Jupiter is his tightest aspect and that refers to making progress in life.

For more about the daily transit of the Sun, read this....

PS: He left the hospital, where they could not find anything else but exhaustion as the cause for fainting.
Geplaatst door Astromarkt op 3:31 PM