Birthday and horoscope of new king of Bhutan 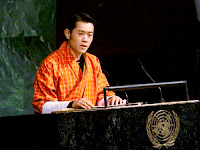 Dragon King of Bhutan, Jigme Khesar Namgyel Wangchuck, has been crowned today. Khesar reminds me of Ceasar (emperor), BTW.
His father (born November 11, 1955*)stepped back in 2006. The young king is leading Bhutan into democracy since he took over. This political process is not easy. Maybe that is why Pluto is prominent in his chart today.

BHUTAN
Bhutan is as large as Switzerland, but there are not even 1 million of inhabitants. Last March for the first time in history, the people could elect a parliament. What more changes can be expected?

CHANGES
The progressed Sun of the king changes sign and Pluto will soon be square that sun. 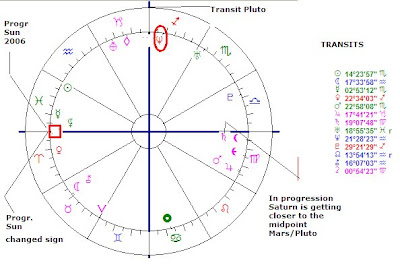 CHART OF KING
Jigme Khesar was born February 21, 1980. Neptune was rising before the Sun on his day of birth. Of the classical planets, Saturn was rising before the Sun and retrograding. There is a Mercury-Jupiter quindecile in his chart for wanting to learn more and more, maybe. And Venus is biquintile Mars (for creative passion). Mars conjunct Jupiter for being productive and successful and Mars 105 Neptune...There is a religious drive in his chart. There is even more successful effort: Mars semi square Pluto for use and abuse of power, joined with Mars conjunct Jupiter indicates this success. The 'stars' seem to have know what they did, because at the day of his birth Juiter was also semi square Pluto.

There is a midpoint yod of Aries Point with Mars/Pluto, probably telling us about the importance of power in the hands of men and this man. And notice Saturn sextile Uranus for the change of the status quo.

DANGER?
Transit Pluto was square his progressed Sun in 2006, when he stepped on the thrown. The progressed Sun is now changing sign and in Aries. Soon Pluto will be square his progressed Sun. It seems to me that (in the circumstances and position of this king) that might make life more difficult for him. He will be confronted with issues of power and politics, but also with cases of life and death. And Progressed Saturn is retrograding and getting closer and closer to the progressed midpoint of Mars and Saturn. I wonder about danger. Maybe Bhutan is still a rather innocent (is it really) and isolated country. But will it remain like that? I think of Nepal, for example. There are a lot of challenging problems waiting for the young king to solve them.

*) November 11, 1955 was a day with Neptune oriental and a tight conjunction between Jupiter and Pluto (there is a similarity with the son and the father). The father had Sun, Mars and Saturn calling in the chart. Sun and father share the prominence of Neptune and Saturn and perhaps more (but we don't know without HOB).

Bhutan, a small Himalayan nation, crowned a new king on Thursday.
A short film about Bhutan. Learn about the traditions and life can be in this movie from the BBC
http://tubedirect.net/index.php?q=BCC-small-Bhutan
Highly recommended!