Capturing the Friedman's: update
and about the effect of Mercury inconjunct Neptune 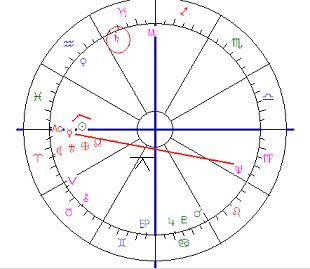 I was throwing away files when I saw this post that I wrote in 2007:

Received 10/04/2007 22:05
CAPTURING THE FRIEDMANS
Capturing the Friedmans, is a documentary that I saw yesterday. Arnold Friedman (born 20th March 1931, see the documentary about his birthday and the stone on his grave) and his son Jesse were convicted in a very peculiar childs' abuse case. Hypnotism by psychologists and a very influencing method of interrogation by the police contributed to a pandemonium of tales about sex orgies after the day in 1984 that the police found child pornography in the house of Arnold Friedman. His son Jesse was supposed to be assisting his father in the evil. There was no fysical evidence at all and some of the statements were clearly false, yet they were convicted after they pleaded guilty to prevent to get life in prison. Arnold Friedman killed himself in jail, so that his son would get a sum of money to start all over again when the best part of his life was over. In 1995, the year of the death of Arnold Friedman, Sun Arc Mars opposed his natal Sun.

In 1984 Transit Neptune squared Arnold Friedman's natal Sun. It is an indication of being seen in a negative light. (Re: the McCann case, see the message of September 25). As soon as people turn into suspects, Neptune is there. Neptune is also there when there are mysteries, when the media is involved (too much) and when certain things remain unsolved.
'Capturing the Friedmans' was a very interesting movie that leaves you wondering. It might be caused by the ambiguous attitude of the film maker, who still refuses to tell the audience whether he considers the Friedmans' guilty or not. But anyway...thanks to that movie I have a DOB.

Arnold Friedman's chart has a prominent Sun in the final degree of Pisces, close to Zero Aries and trine Mars. Saturn is the oriental planet (I don't consider the inner planets Mercury or Venus oriental, unless they are prominent because of being unaspected or connected to Zero Aries). This Saturn is in Capricorn and afflicted. He was a conformist in the first place (a tiny man with enormous glasses). He was a valued teacher before 1984.

Now look at the most narrow aspect in his chart. That is Mercury inconjunct Neptune. This immediately reminded me of the chart of Patrick Dils. I wrote an article in Dutch on Astromarkt.net about the case of Patrick Dils, a man who was convicted for murder and later released with a large sum of money and excuses. Mercury-Neptune is confusing...

Jesse, the son of Arnold, is free (after 16 years) and is in appeal. That is what Wikipedia tells us.

UPDATE
On his site http://www.freejesse.net/ Jesse now writes about his parole and the rejection of appeal (because of asking too late) and how this effects him. I very much like the phrase he posted:

"Does a firm persuasion that a thing is so, make it so?" -- William Blake

In the late 80's sexual abuse and 'lost memories' were hot items for psychologists. Also in my country. In my country, in 1987, a whole village came to believe that children had been abused or molested by 'clowns' in a cellar. They actually BELIEVED it was true. It started with ONE child with strange little injuries (that could be caused with playing games) and it ended up in an interrogation of all children by a psychological institution. They used puppets and pointed at the puppets asking if the children were touched there and there. And this method produced an unbelievable amount of positive answers. As Katherine Beckett said in 1985:
"While no one condones child abuse, concern about child sexual abuse now
borders on hysteria." [...] The child abuse industry operates on the presumption of guilt." Right, who benefits from it, that is the question, helas!

With Mercury inconjunct Neptune one easily becomes the victim of a mistaken idea.