In July 2007, 100 year after the day that Frida Kahlo, the famous and tormented artist, was born, I wrote about her chart on my site Astromarkt. This is a translation of what I found in her chart. It is a complete reading of her natal, transits and progressions related to her vocation, her suffering, her marriages and relationships and the accident that crippled her. She was born July 6, 1907 at 8h30 a.m. in Coyoacan Mexico and died without children on July 19, 1954, shortly after she became only 47. She had a life full of love and pain. Venus conjunct Pluto is the tightest aspect in her chart and that combinatiion links pain to love and art and produces intense feelings. 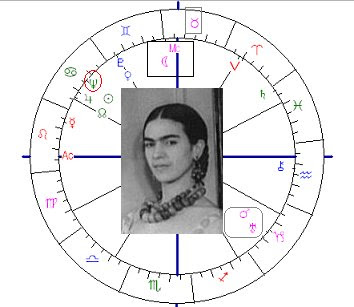 ARTIST
Her chart shows the artist. Notice Taurus on the Midheaven, disposed by Venus in Gemini and the routing ending in Venus again. Neptune rises before the Sun for an orientation on the immaterial world, like the world of arts. Jupiter is not making major aspects in sign and orb 5 degrees. Jupiter rules the 5th house of creativity and is parallel with Neptune. So is the Sun with Venus…
The elevated position of the Moon in Taurus is another sign for sense of beauty.

ACCIDENTS, ILLNESSES, SURGERY
Frida Kahlo was born with Mars conjunct Uranus, and both were retrograding in the fifth house. When she was very young a heavy accident crippled her. She underwent several operations. Mars-Uranus is a combination that is frequently related to accidents. There is an article about this combination of planets on Astromarkt…*)

At age six she got polio. That was when Saturn retrograded to the natal positon. That is a very rare progressive aspect! Saturn disposes of the 6th house of illnesses and is positioned in the 8th house of life and death, sexuality and problems. The progressive MC was conjunct natal Moon in the final degree of Taurus (change of perspective and possibly it is the moment that she became aware of her sense of art).

THE ACCIDENT AND THE ROAD TOWARDS ART
She was studying medicines when she had the accident (in September 1925, age 18) Afterwards she stopped her study and more or less forced by circumstances she focused on arts. For that moment of vital changes in life we see the following indications:

1. In 1925 her progressed Sun changed sign
2. In the solar return chart of 1925 Uranus is on the IC and Pluto is conjunct the Sun. Uranus and Pluto together strongly indicate the unexpected, sudden change and danger.
3. On September 11, transit Uranus is square natal Pluto: that is a confirmative transit of the earlier mentioned under 2.
4. On September 13 Neptune is exactly square her Midheaven
5. Jupiter is activating the Sun-Mars-Neptune constellation. Should I read this as Jupiter helping inactivity or should we see Jupiter as the doctors saving her life?
6. Transit Uranus inconjunct Ascendant (exactly on September 16) is an indication for a possible shock or surgery.
7. Progressed Midheaven is inconjunct Uranus in 1925.

You see that there are an impressive lot of indications for dramatical changes and for having to give up her career (Neptune
In her natal chart there are Mars-Uranus, Sun-Neptune and several midpoint combinations as a sort of a predisposition for accidents and surgery, probably because of impatience and being a dreamer (not noticing things in times).

SEXUAL RELATIONSHIPS AND MARRIAGE
The pain and suffering did not stop her to marry and the scars and handicaps did not stop sexual relationships with men and women. Venus conjunct Pluto and square Saturn shows the ‘die hard’ when it is about love. Notice Sun opposition Mars and Uranus: two of the four most frequent indications for divorce in the charts of women (the other two are Mars-Saturn and Venus-Uranus afflictions).

In the year of her marriage with Diego de Rivera (an artist) she had the very fortunate progression of Moon trine Jupiter. The Moon was sextile MC and also square Venus and Pluto for intense feelings of being in love. The progressed Moon also was trine progressed Venus. She must have been very much in love with Diego.

Later Frida and Diego divorced after him having an affair with her younger sister, but in 1940 they married again! Her progressed MC was conjunct Venus and Pluto, her progressed Moon conjunct progressed Venus and the solar return chart has Moon conjunct Sun (all indicating love and marriage), with Jupiter on the MC for a celebration.

I don’t have the chart of Diego de Rivera, but I do have the chart of Leon Trotzki (born November 7 1879 at 22h10 in Janowka). Frida had an affair with the famous politician..His Moon is on her Ascendant, his Midheaven is square her Jupiter (ruler 5) and his Mars is trine hers.

DEATH
She died one week after celebrating her birthday. The solar return chart’s Moon was conjunct the natal Midheaven to indicate a change in condition or position. Venus (ruling the 8th house of life and death in the solar return chart) was inconjunct Frida’s prominent Moon in Taurus.

On her dying day transit Pluto was square MC and conjunct ASC. Mars was square Saturn. The combination of Pluto, Mars and Saturn is always a critical one. With Jupiter opposition Uranus on that day we might speculate that her death released her from the pain she had. In the year before her death she had suffered a lot of pain (transit Saturn was conjunct her natal Sun) due to the amputation of her leg. It has always been suggested that she helped death with an overdose.

What an intense life she had! She was a very special person with a very special and intense chart. Most of the time the chars of extreme persons and/or lives are very explicit!

RELATED
Mars and Uranus combinations
Venus and Pluto combinations
For more posts about astrology related to arts, accidents, Venus, Mars, Pluto or Uranus, just click on one of the labels you see right under this post.
Geplaatst door Astromarkt op 8:23 PM