The capacities of the day of birth of Meg Whitman 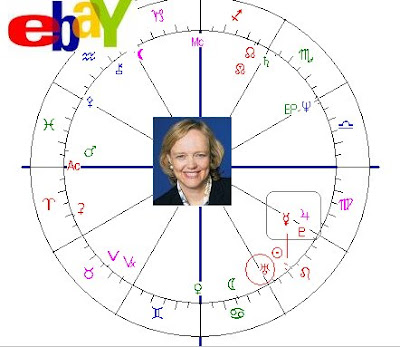 When Meg Whitman joined Ebay, the company became a success. Her name was mentioned as a possible vice-president instead of Sarah Palin, but with transit Neptune square her natal Sun there was a big chance of dissapointment. Still, Meg Whitman is a capable person for business and politics as we know. And on her day of birth we see the astrological symbols of her capabilities:

1. a 'calling' Sun for leadership
2. a 'calling' Jupiter for successes
3. a 'calling' Uranus for changing 'the world'
4. Sun quindecile (75d) Neptune for a possible 'double' life or living for an ideal in an obsessive way
5. Sun-Pluto 15 degrees with Sun-Saturn 105 degrees for the very strongly focussed die hard
6. Mercury conjunct Pluto and square Saturn for politics and strategy (see the charts of USA presidents, who generally have this combination in their charts).
7. being inventive and unique (or controversial sometimes) with Uranus oriental
8. notice the combination of Mercury, Jupiter and Pluto: a combination for success
Geplaatst door Astromarkt op 10:55 PM