Rambo for Obambi, that is what Rahm Emanuel (born November 29, 1959 in Chicago) is supposed to be for Barack Obama. He is the chief of staff of the new president elect and used to be the chief staff of Bill Clinton. Rahm Emanuel is known as a tough person. You can see that in the positions of his day of birth. Emanuel is a true 'die hard' with Sun tightly square Pluto and semi sextile Saturn. And he bites: Mars is oriental. Now why did Obama select this man? 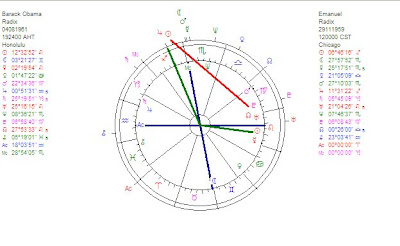 Notice that Obama's Pluto (ruler 10) is square the Sun and conjunct the Pluto of Emanuel. It is a strategical or somewhat forced upon choice: perhaps Emanuel is the best:). Emanuel embodies the specialist in politics.
Also notice Jupiter of Emanuel trine Obama's Sun: Emanuel is supporting Obama and Emanuel is trusted by Obama. The interaction between the charts and the Suns is by Jupiter and Pluto, a combination that signifies success.