Identical patterns in the charts of M.L.King, Schapelle Corby and Tsar Nicholas II

Today, searching for examples of Sun conjunct Midheaven, I 'discovered' a shared (identical) pattern in 3 charts. Maybe you have read my article about identical aspects that two partners are sharing? A pattern is more than one aspect or placement. Martin Luther King, Schapelle Corby and Tsar Nicholas II share 6 important identical placements or aspects in their charts. In their lives what they share is a period of imprisonment and taking risks, perhaps. And (even Corby) their fate was of importance to the people of their countries.

PATTERNS
The pattern is formed by the prominent planet, an angular placement, a placement on top, AND 3 shared aspects at the time. Scroll down to see the indicated patterns. They are:

I think that it is a pattern with the calling Sun on the MC as the key, leading them to playing the starring role in a reality drama.

1. Calling Sun conjunct Midheaven
It means drawing attention at any possible level and a spotlight on the condition and position (the status) that is of crucial importance.
2. Saturn's prominence
Restrictions, limitations and obligations are prominent in their lives. Sometimes because of the law, sometimes because of the protocol, but anyway: they have to deal with barriers.
3. Moon related to Uranus
This aspect combination tells us that they have a need for excitement, change and indolence. So they are not likely to listen to good advice and they will not be stopped because of warnings.
4. Sun semi square Venus
Vanity perhaps? Wanting to be loved and not being able to say no?

Even though they are different kind of people they followed a pattern that eventually made them the star in a public drama. Martin Luther King had enemies and so had Nicholas II. They were identified by their public position and they died because of it.

CORBY
Schapelle could have been sentenced to death, but being a foreigner helped her survive. She drew attention (Sun conjunct MC) and she had an excited or different behavior, too (Moon-Uranus). As she was good looking, they noticed her (Sun-Venus) and she had bad luck (Saturn related to Aries Point). All three of them have enemies and followers. Nicholas, who died a cruel death and was a person of cruel measures himself (Mars-Saturn and Pluto are prominent), is now considered a Saint. Martin Luther King, who did not seem to have lived the life of a saint, is still a worshipped person. And there are many people who believe that Schapelle Corby is innocent and even more who think that 4 years in an Indonesian prison is about enough. She wrote a book about her trial. I think it is a rather cynical reflection of the prominence of Mercury and Jupiter in her natal chart, that she is writing in a foreign jail. Mercury is the symbol of transportation and communications. Jupiter is the international and symbolizes traveling and publications. Neptune is opposition her Sun/Moon midpoint and on the final day of her trial transit Neptune was inconjunct her progressed Sun and MC to express the lost of her life as it was.

The Australian astrologer Helen Hartley published the reading of the chart of Schapelle Corby (born July 10, 1977 at 11:50 AM in Brisbane). I am not sure if that reading helps to liberate Schapelle. You find it here:
http://www.astrologymatters.com/case_studies/schapelle_corby.pdf

M.L.KING
There is an earlier post about the chart of Martin Luther King on this blog ...

PS: NICHOLAS II
PS about Tsar Nicholas II's chart: the prominent Saturn on the IC reflects a mistake of the past that was not forgiven. With Progressed Sun and Midheaven inconjunct Saturn he gave the order to shoot at a crowd of people asking for more civil rights. The Tsar doesn't help us, said the people. And that in fact iniciated the end of his position.

Here are the charts. There is a lot more to tell about them, but this IS a blog and I am just pointing at astrological patterns... 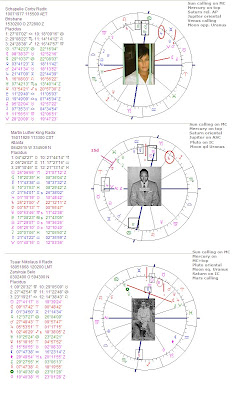 It is now January 2013 and Schapelle is still in jail in Bali; even after the release of Expendable on the internet which proves her innocence. Is there anything in her chart which indicates what her fate will be? Does it look like she will have to wait until October 2017, or will she get parole this year, or will she die in jail.

Hi Suzann, the recent conviction of a British woman doesn't give much hope. There is Jupiter transit her Midheaven between September and May 2014. That might improve her situation. It will be between May 2015 and December 2017 that transits of Uranus and Pluto on MC reflect changing conditions. I hope for her that she doesn't have to wait till then!, but in 2018 MC conjunct Progressed Venus at least gives hope for better times in future.