A week ago, Barack Obama joked about Nancy Reagan saying that HE did not consult dead presidents. Later he apologized. Nancy Reagan consulted astrologers, she was not using mediums. I think that this is a good moment to read the chart of the former first lady of the USA. (Click here for the Dutch version of Nancy Reagan's chart reading) 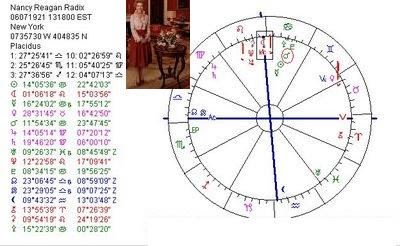 Her Moon in Leo is calling (not making major aspects) and crucial (angular, on the MC)
Her Venus in Taurus is calling, too
And her Node is conjunct the Ascendant

We can also see the man with power in her chart (Mars and Pluto rising before her Sun).

HER ASTRO I.D.
The Moon in Leo is most prominent in her chart. Nancy distinguishes herself by a need for attention, luxury and glamour at any possible level. Imagine how a woman with a screaming Moon in Leo on the Midheaven will always and above all be and you see the spitting image of Mrs. Bouquet or Mrs. Bucket, a character in a British television series. Mrs. Bucket wants to have attention the royal way and she wishes to be a sort of a first lady. Well, Nancy managed to be one!

Venus calling tells us about good taste and manners, diplomacy, cooperation skills and beauty or charm. And the placement of the Northern Node on the Ascendant indicates that her way of acting is adapted to the sort of company.

All this leads to the conclusion that this chart belongs to a very proud and representative lady.

Moon/Venus/Node- combinations indicate a group of beauties. Nancy Reagan was a beauty queen, a movie star, and as the wife of Reagan she made the White House a palace, because Venus is for decorations:)
But watch it: she didn’t have the position because SHE was a leader or a chairman. She had a position politics (Pluto, Saturn) prominent. All of her life Nancy Reagan remained a royal beauty queen with an important sort of company.

QUICK SCAN
Now let us have a look at the character. Does her character ‘go’ with her I.D.?
We see Sun in Cancer and a Moon on top for imitation, education, acting and keeping things going in the house. Sun and Moon are in mutual reception and that makes us aware of the importance of marriage in her life. Performing, showing off (Leo and Moon on MC) was important for her. The Libra Ascendant makes us think of her prominent Venus. She combined a certain starry role (Moon in Leo on MC) with the will to keep traditions alive.

So yes, her ID and character are matching. That is how you get the rather traditional (Moon, Cancer) role of the presidents’ wife, in combination with drawing attention, glamour and luxury (Leo). Leo is also a good sign for being loyal and she has always been loyal to President Reagan. Her Pluto square his Midheaven and his trine her Ascendant show the great influence that they had on each other.

ASTROLOGY
I have found Jupiter-Uranus combinations in all of the charts of astrologers. And where do we find Nancy's interest in astrology? Perhaps it is the combination of the Sun sextile Jupiter and trine Uranus and the creative biquintile of Uranus with Midheaven in the chart of Nancy. 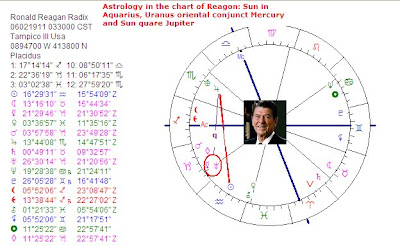 I also see Jupiter-Uranus combinations in the chart of her husband. Jupiter, square the Aquarius Sun, with Jupiter quintile Uranus...

Well, history is positive about the Reagan-period. And that is positive for astrology, whatever jokes they are making.

RELEVANT
More charts of USA Presidents of the past and what they have in common.
Geplaatst door Astromarkt op 7:25 PM