On special request I present the chart of Sourav Ganguly, famous former captain of the Indian cricket team, who recently 'retired' at age 36 after a disappointing year with Neptune opposition progressed Sun. This was followed by an inconjunction (for having to let go) by the transitting Jupiter. I think that this retirement will allow him to do more what he really likes, since he is and was born rich enough to use all the potential of his chart, that you see here below. 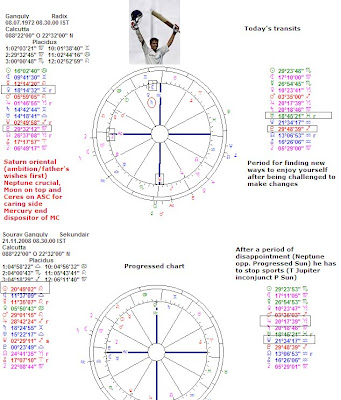 The natal chart has Neptune on the IC, for the importance of the amorphous world. Whereever he goes, he takes the image of the goddess Kali with him.
Notice Moon on top and Ceres on the Ascendant: those planets represent the softer sides of human kind, the nurturing and caring side. We know that he supported younger cricket players in order to teach them (Moon on top!) and so I am happy to read that he has been appointed to be an advisor and ...that he owns a restaurant (Ceres for nutrition). But where did the success in cricket come from, apart from the fact that he had been trained by his father since he could stand? Where is the agressive player and willing coach in this chart?

First of all: he has Saturn oriental (rising before the Sun). So he first did what he had to do, make a career, please his father. Also, what I found was that Jupiter and Pluto are not making aspects in sign or orb 5 degrees. I name that 'calling planets'. Jupiter and Pluto 'calling' reflect an enormous self confidence. The combination of those planets prominent in a chart promises successes with exclamation marks. This is especially so in this chart, since both are connected to the Sun and since the Sun is conjunct ASC/MC for the star who was born with the ability to win in a creative way (Sun quintile Pluto) and who had an obsession for having successes with games (Sun quindecile = 165 degrees from Jupiter in the fifth house). It must be hard for him to give this up!

The vocational routing through the Midheaven leads to Mercury in Gemini, the sign on the Midheaven. Gemini is usefull for sports like tennis and cricket, as the arms and hands are the tools. Mercury and Gemini are also the symbols of communications. I was told that he has his own column in a newspaper. Sourav Ganguly really uses all of his potential!
Geplaatst door Astromarkt op 10:40 AM

I found this site using [url=http://google.com]google.com[/url] And i want to thank you for your work. You have done really very good site. Great work, great site! Thank you!

Sorry? Why?
I thank you for your kind comment!:)