There is much disagreement about the question if Joran van der Sloot did or did not kill Natalee Holloway but there is a lot of agreement about the idea that he is a liar. The tightest aspect in his natal chart is Mercury square Jupiter for exaggeration of communications. See below for an explanation of the way the combination of Mercury-Jupiter might produce over-communicating. 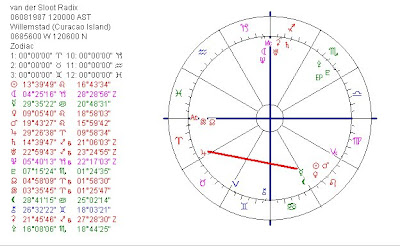 In the article about Mercury and Jupiter on Astromarkt (only in Dutch) you see this:

Especially when there is a conflict between Mercury and Jupiter receivers of the message notice that facts are sometimes just opinions and opinions are broadcasted as if they were facts.
In other words: the messenger is not always thrustworthy and switches opinions from day to day. That is because the facts have to be adjusted to the conviction, from day to day. Another problem is: who remember all of his exaggerations? The person born with a hard aspect between Mercury and Jupiter will have trouble to remember them all and the audience feels as if the speaker is twisting and turning facts.

The conflict Mercury/Jupiter is a conflict of bad judgement, not being willing to hear the truth and not always wanting to know the real facts. Sometimes they mention facts that they even don't believe themselves, so how can the receiver of the message belief it? In the case of politicians who have to express the opinion of the party, but in fact have another idea it is sometimes clearly visible. With Mercury/Jupiter afflictions one does not always tell the facts, but when needed they say it all (even if that is indiscrete).

The sesquisquare of Mercury with Saturn in combination with the square of Mercury and Jupiter tells us that there is a serious disadvantage for Van der Sloot in saying too much and in making up stories.

Of course, there is an advantage in being able to talk much and make more of the facts than they really are. Salesmen benefit from it, so do authors of fiction and columns or blogs when they need a lot of words to fill their pages. It is the person with the tool in hands, who decides how to use it.

Mercury is the planet of communications and communicators. Journalist, writers, teachers, messengers, books, pens, prescriptions...they are all part of the world of the symbol Mercury.

Jupiter is the planet of higher education, develpoment, growth, convictions and wisdom. Church leaders, coaches, stimulating persons in general, advisors, cars, horses and guides belong to the world of the symbol of Jupiter. Jupiter makes things better (most of the time) and Jupiter makes things greater.

So when Mercury is related to Jupiter the communication skills are greater and sometimes the contents of the message will be made greater than it is. And sometimes with this combination in your chart, you just talk too much.

Click on 'VanderSloot' for earlier messages and links to posts about the case of the missing Natalee Holloway.
Geplaatst door Astromarkt op 7:21 PM

Mercury in cancer is already a contradiction in itself. Cancer speaks out feelings, not facts.