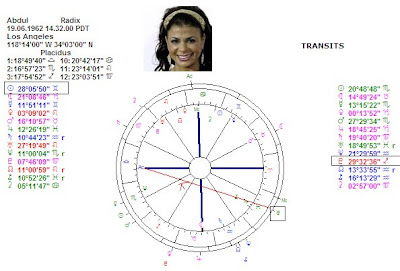 Paula Abdul had a stalking fan and today this fan was found dead in a car, close to the house of Paula Abdul. It must have been a scary experience. We see transit Uranus inconjunct the Ascendant of Paula today, with Neptune inconjunct MC, Jupiter square Ascendant. Her progressed Sun is inconjunct Jupiter and Jupiter inconjunct progressed Mars. Do you notice, with me, that there are 3 inconjunctions today, tight inconjunctions? Inconjunctions in transit indicate a loss, something that leaves your life. Click 'inconjunction' below this message to find out more about that aspect.

OBSERVATIONS
Paula Abdul was born June 19, 1962 at 14h32 PDT in Los Angeles, according to Astrotheme.fr.
The Moon is on a crucial spot, conjunct IC, in her chart and Mars is oriental. As an astrologer I am pleased to see that Venus does not make any aspect. That makes Venus, planet of beauty and arts, 'calling': an important planet to consider when the vocation is concerned. Paula Abdul has a call for arts, entertainment and fun. Popularity is crucial (Moon, ruler 10) and we see energy. Mercury is end dispositor of the Midheaven. Communicating (using voice or writing it), art/entertainment and energy/enterprise with the Moon (educating, acting, feeding)...those are the prominent items in her chart.

VOID SUN
Paula Abdul is a choreographer, a dancer, a singer, a tv-personality and for some times even an actor. But it seems that she is at best in choreography. Her Astro I.D. tells us that she above all an artist at any possible level (Venus on top, calling). Notice how the Sun is separating the last aspect in sign (a void of course Sun?:). She sure knows how to draw attention.*)

COME BACK: PLUTO
I have stated before that Pluto's transit often goes with a come back. Paula Abdul had her come back as a singer his year. And transit Pluto was opposition her natal Sun...And as a matter of facts, Pluto is the symbol of being confronted with death, too. 2008 was a year of intensity for Paula Abdul.


*) I am aware that it is rather controversial to name the Sun 'void of course' in astrology, where only the Moon seems to be able to 'void of course' and only in horary charts. In this case I mean that there will be no more aspects with the Sun in the sign of birth in progression. I think that sort of 'intensifies' the nature of the Sun, that will not be influenced by aspects. The Sun is in Gemini. Gemini is the sign of dancing.
Geplaatst door Astromarkt op 10:02 PM