Day of birth of Pierre Omidyar (Ebay): born to be leading in business 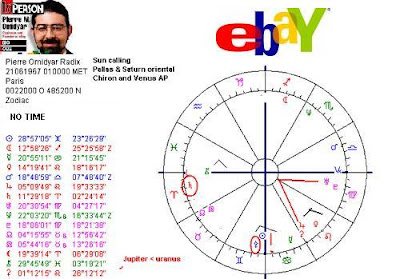 The day of birth of Pierre Omidyar, founder of Ebay, was a special day. On that day, the Sun was 'calling' (no major aspects in sign), Pallas was conjunct the Sun and rising before the Sun, Saturn was the classical oriental planet and finally: Venus and Chiron were connected to Aries Point. The closest aspect on that day (apart from the aspects with the Moon) was Jupiter semi square Uranus. This is the day that a peson could be born who is a:

- leading figure, drawing attention at any level (Sun)
- a person who is focussed on patterns (Pallas)
- a business man, hierarchic, serious, perhaps in science (Saturn oriental)
- inventive (Jupiter with Uranus)
- and know as a nice and alternative person (Venus and Chiron; think of charity).

And we even don't know what time he was born! Within the right conditions and situations the chart offered the possibility and characteristics of a successful business man. The time line produces a progressed square of Mercury and Saturn in 1995, when he started Ebay, the website and business (Saturn) met communications (Mercury) or science (Saturn) met commerce (Mercury). He became rich in short time in 1998, with Mercury still square Saturn in progression, because Mercury had been retrograding.
Geplaatst door Astromarkt op 10:28 PM