Indira Priyadarshini Gandhi was born on November 19, 1917 in Allahabad, India. She was the only child of the first prime Minister of India, Jawaharlal Nehru. Here you see the natal chart of Mrs. Gandhi with an angular Uranus and Saturn (sesquisquare Zero Aries), Mars oriental, and Ceres the first planet to rise before the Sun, angular and crucial on the IC. Mrs. Gandhi was born in an influencial and important family. Her father and the dynasty (Saturn and Ceres) were important for her position in life. Seen in the light of that position we could read Cers on the IC like this: mother (Ceres*) of the nation (IC). 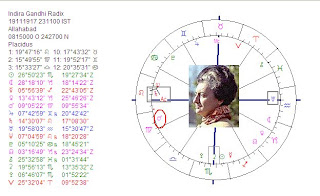 MOON IN CAPRICORN: Need to be in charge
Moon in Capricorn is 'void of course'. I use that term for the natal moon, even though it is generally being used in horary charts. I mean that the Moon will not make any more aspects in sign. The latest aspect was the sextile with the Sun. Moon in Capricorn shows a need to be in control and is symbolizing an urge for a career. Given the importance of Saturn (being related to Zero Aries and close to the Ascendant and 'calling') this Moon in Capricorn tells us a lot about the personality of Indira Gandhi. Saturn is often prominent in the charts of people involved in the administration.
Together with the Sun in Scorpio, this Moon gives the ability to withstand political adversities. The rulers of Scorpio and Capricorn are Saturn and Pluto. Those planets symbolize the 'die hard'.

SANJAY
Indira Gandhi lost her son Sanjay due to an aero plane crash on June 23, 1980. Observations of the transits, progessions and the solar return chart show a Mars-Uranus connection, indicating shock and injury.
That day Mars was inconjunct her Uranus, symbolizing the accident. Transit Mars was also opposition her Midheaven and transit Uranus was sextile her ASC, while transit Sun was square Mars.
Ceres is in her solar return 8th house of life and death in the year of her son's death, 1980. That was also the year in which her progressed Sun changed sign for a change in life or lifestyle.

MURDERED
She did not die a natural death. She was murdered by a Sikh guard a few months after she ordered to attack a temple, an attack that cost the life of about 1000 persons. On the day of her death the tightest aspect was that of transit Saturn opposition the Midheaven. For the issue of unnatural death we see several indications:
- Mars semi square the midpoint Saturn/Pluto and
- Vulcanus 67.5 degrees from ASC/MC and semi square Pluto/MC.

When she died, it was with the Moon conjunct Midheaven (change!) in the progressed chart and the progressed ASC was opposition progressed Sun/Pluto (for a life endangering situation). The progressed Uranus and Pluto were sesquisquare for a revolutionary change.

ABOUT CERES
*)Ceres, btw, also symbolizes inheritance. The angular position of Ceres points at the crucial importance of the symbol of Ceres in her life. For more about Ceres, see the earlier post.