Last January I posted about the strange connection between the charts of McCain and Hillary Clinton. By now, we know that Hillary's hour of birth is questionable and the McCain's is 18:25 in Colon. Most of the transits and progressions changed. And now McCain uses Hillary's words against her candidate. What do their charts show us? 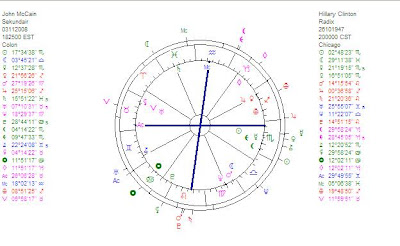 The combination of Mars-Saturn-Pluto does not seem to show kind interaction IMO:) He sort of killed her politically!

What happened?
He inventively (Jupiter-Uranus) used her words against the candidate of her party. She stated that McCain is much more experienced that Obama is, where she had better said that SHE herself...So what, it is too late for feeling sorry. And it seems they like each other. Or should I say 'liked', after this abuse of her words.

Hillary must have been struck by this today. Transit Mars is square her Saturn and conjunct her Mercury now. Hillary Clinton has Mercury square Saturn in her chart. In her campaign she used hard (Saturn) words (Mercury). And now, with the transit of Mars, those words are used to strike her. Senator McCain reminds Obama about the words of Hillary Clinton. Will she have a position in the Obama administration? If she wanted that, has McCain made it difficult for her?

RELATED:
The old post...about the strange interaction between the charts of McCain and Hillary around election day.

Please click on Elections below, Elections (as one of the labels) or Elections on the top on the left (under HOME) or HERE to find more about the presidential elections and the charts of the candidates.
Geplaatst door Astromarkt op 7:24 PM