Chart of Josef Fritzl, the man of cellars and attics

Josef Fritzl is in the news again these days. An Austrian newspaper says that the psychological report reveals that Fritzl held his abusive mother on the attic for over 20 years, without daylight, until she died, out of revenge. Before, he was arrested for keeping his daughter and their children locked up in the basement. And nobody noticed...His chart has the same structure as the chart of O.J. Simpson has: harmonious major aspects, difficult minor ones. Just like the attic and the cellar were conceiled for the public eye, so were his crimes. 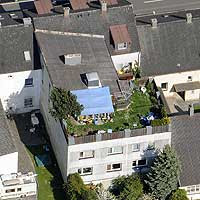 Fritzl lived in a large house. That was one of the conditions that allowed him to act as he did. Only a combination of character, situations, conditions and genes, mixed with an obedient and impressed family living in a play conducted by Fritzl himself could have produced this affair. Even without HOB the potential blue print is visible in the chart. But there were others born that day#), and they have a different life story. Apart from the fact, that an hour of birth completes the picture, there are other components for his life story.

In the wrong hands, in the wrong place and in the wrong time, this chart has the potential for family abuse, indeed. All of those wrong conditions were available in the life of Fritzl. There was abuse in his family, he lived in a place where nobody asked question and maybe these days the authorities would have been more alert. His intimidated family didn't stop him. Neither did the authorities. Maybe the lesson is that an abuser should be controlled always (also mothers hurting children), that creative talents should be allowed to grow and that no person should be allowed to have the power that Josef Fritzl had at home.

CHART OF THE DAY OF BIRTH 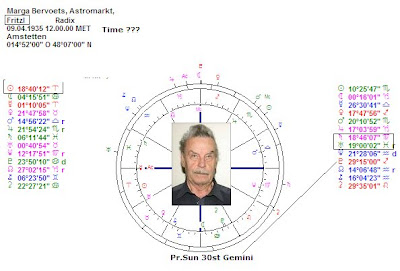 Now about the blueprint, the chart...
The chart shows us that Fritzl had a strong need for family life (Moon in Cancer***) and that he had an obsessive sexual 'overdrive' (Mars quindecile Uranus). He knew how to use and abuse power (Mars/Pluto with Sun) and his status and security (Saturn oriental) were important to him. Being a creative liar (Moon-Mercury, Neptune calling) and a successful (Jupiter trine Pluto) 'die hard' (Saturn-Pluto-Aries Point), it was not hard for him to create a theater play. Back stage it as a different story.

SATURN-PLUTO
The publication of the psychological report happens with transit Saturn inconjunct Fritzl’s natal Sun and Pluto opposition his progressed Sun. With Saturn-Pluto**) combinations sometimes the disadvantages of inquiries and research become an issue and it is a moment of testing your self esteem.

In the meantime, his name is synonymous to abuse and horror. Zero Aries is connected to the midpoint of the die hard (Saturn/Pluto is semisquare Zero Aries), the double life/suspect (Sun/Neptune is square Zero Aries), and the extreme male (Mars/Uranus 112.5 d Aries Point).

ABUSE: MARS-PLUTO
I have written about Fritzl before (see link below). In the earlier post about the Fritzl case I pointed at the tight midpoint combination of Sun sesquisquare Mars-Pluto (Sun is in the middle of an oppositon with Mars and a square with Pluto), for use and abuse of physical power. And how his daughter has Sun conjunct Mars and inconjunct Pluto (unbalanced self esteem). The fact that she has Mars biquintile Pluto offers the opportunity to revenge herself.*) Maybe in the family of Fritzl this combination of planets goes from one generation to another and shows a hormonal effect in the genes.

It is hard to believe, looking out of my window, seeing the sun and blue sky, that any person could be held without anyone knowing about it. He could held his mother, because there were no brothers, sisters or other family members asking questions. His wife seems to haven been deaf, blind and dumb and his children too. How can that be? He locked his daughter in the cellar in 1984. He kept his mother in the dark between 1959 and 1989. Did Rosemarie or Elisabeth ever notice the presence of an old woman in the house? And what did he do with the body when his mother died? He had told the world that she died in 1959...
It is a strange story. But not unbelievable. It reminds me of the recent conviction of a mother in an Eastern Europe country. She used to watch her sons suffer on the monitor in her pretty citchen, cooking the food that they would not get. Her neighbour (who had not suspected such a thing) catched the picture on HIS monitor and that is how the world found out about it. It takes a lot of acting capabilities and being a good liar to keep this façade up. And he had those capabilites. Fritzl has Moon square Mercury and a prominent calling Neptune biquintile Sun (for telling what they want to hear and for creativity). So should we believe what he says?

THE MINOR ASPECTS for THE PERSON BEHIND

Even though he was not perfect, most of the people who knew Josef Fritzl believed in the picture of him that you see on the photo.
I have noticed before that the major aspects seem to correspond with the major idea of ‘the others’ about a person. And that the minor aspects tell us more about the person behind the person (the chart behind the chart, see the post about O.J. Simpson).It is the same with the chart of Fritzl. The tightest major aspect (the Ptolemaic aspect) is Venus opposition Jupiter. It is an opposition between the planets of fun and joy and offers a way to be popular or successful as an artist, for example, or with money. Josef Fritzl loved (Venus) to travel (Jupiter) and from the fact that he had friends who joined them in Thailand on holidays, we may believe that there were persons who liked the man.

Now look at the tight minor aspects.
1. Neptune tightly sesquisquare Northern Node; negative frustrating relationships
2. Venus 75 degrees away from Saturn; obsessively sticking to the disadvantages of marriage
3. Mars is quindecile Uranus (165 degrees) for obsessive sexual overdrive.
4. Two creative biquintiles: Venus-Mars and Sun-Neptune, creative in passion, able to realise his dreams by creative fantasy.
He has an indications for more than one marriage or a divorce (Mars-Uranus( but with Venus-Saturn, he never divorced. He started another family life keeping the first one intact. Circumstances allowed that his extreme sexual practices could take place without anyone noticing this. His neighbours didn't know, his family didn't suspect this...Would any astrologer have know, even if they had his HOB? I wonder. Most of the most challenging aspects CAN be used to be creative. Unless your genes (!), circumstances and situation (for example the situation at home as a child) forbid it. It is the combination, the mix, that does it, like a recipe with ingredients, that cannot do without a mixer, an oven and a cook.


#)There were others born on his day of birth, for example:
1. actor (Neptune calling!) Avery Schreiber who died in 2002 and suffered from diabetes (Venus-Jupiter). He had a heart attack in 1994 and had surgery (Mars-Uranus quindecile) but never recovered.
2. Alies Sallinnen, a Finnish composer (Neptune calling!) who's last work of art was created in 1999.
3. The prominence of both Saturn (oriental) and Neptune (calling) makes us think of an illness and of being 'sick'. Or is it lack (Saturn) of empathy (Neptune)? One of the persons born on April 9, 1935 was a museum manager and I think that person creatively used his Astro I.D. to manage (Saturn) arts (Neptune). Cellars and attics, aren't they symbolized by Neptune (the planet of hiding away?). Neptune is 'calling' in the chart of Fritzl. He used his fantasy and creativity the wrong way. It could have been different.


*) See how Mars-Pluto with Sun-Pluto worked in 'Manuelgate'.

**) Read about the effect of Saturn-Pluto on my site

***)Moon in Cancer, is not that the desire of keeping memories and emotions alive (like an actor does, or the manager of a museum)? Moon in Cancer also sticks on to his family and mother...Keeping her locked up in the attic seems to be a rather extreme way.

BTW (a besides): JAIL BIRDS AND HARMONIOUS ASPECTS
One of the most interesting things about the chart of Josef Fritzl is, that there are no tight squares. It seems that there are more inmates without squares in their charts than those with hard aspects. That might be, because soft aspects seek for the easy way out. In the life of Fritzl, who was aware of his sexual disorder, using and abusing his child and mother may have looked like such an easy way out.