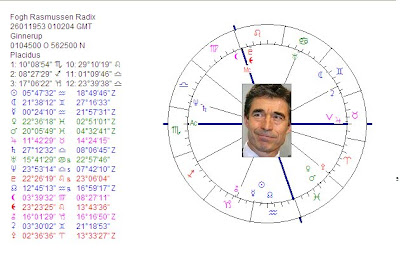 On Astrology.dk, a Danish astrology site, I found the chart of Anders Fogh Rasmussen, the man who is likely to be the next NATO secretary-general. Only mr. Erdogan is or was (?) against it (and that is because Rasmussen defended the right of freedom of speech in the cartoon riots).
Mr. Rasmussen has Transit Jupiter square progressed Jupiter and transit Venus conjunct progressed Sun however. Venus and Jupiter are the astrological signs for a nice moment (if not a party). So perhaps mr. Rasmussen will be installed soon. Who is he (according to the chart)?

BTW for the Mercury-Saturn-Pluto combination in the charts of American presidents, see my site Astromarkt.

Barack Obama has Saturn 157.5 Mercury/Pluto...See the posts about his chart...