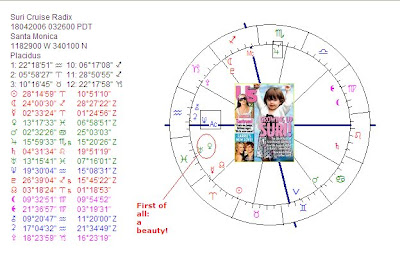 When a person is born with transit Neptune on the Ascendant and Neptune is approaching within a few years, there is the issue of isolation (perhaps hospitalisation) in the early years. (I know of a person who was in hospital in her first year. Later she started working in that field.) So in this period, her parents should guard her against feeling left alone and isolated. Going to school all day (without a period of trial) might make her feel lost.

In Suri's chart, Jupiter is also important (being elevated). The combination of Jupiter and Neptune refers to 'the devoted audience' (fans, followers, religion). The prominence of Jupiter and Neptune in the natal chart of Suri Cruise might of course point at the crucial importance of Scientology. But also at having fans and followers (a public). She is a pretty girl already...

BTW: Thought you might like to know that Suri Cruise will have a very happy birthday, with Jupiter - the planet of joy - on the IC of her solar return. So all's well that ends well, perhaps. The solar return chart is supposed to indicate the situation of the year to come. And Jupiter (symbol of the coach, doctor and advisor) always helps and protects. Transit Jupiter will be conjunct her Ascendant soon, so good advice is on the way!