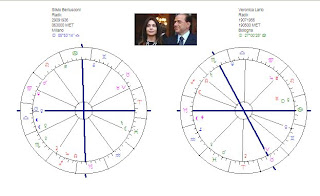 Silvio Berlusconi and Veronica Lario (pseudo for Miriam Raffaella Bartolini) married on December 15, 1990 (when their Sun sign changed in progression and so did their lives! See the progressed chart below). They have 3 children together, the first one born in 1984. They know each other from the 80s, it is a long lasting relationship. 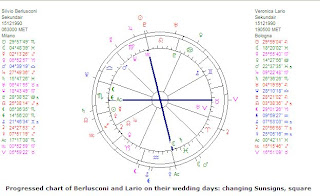 Veronica seems to communicate with Silvio by means of public letters. In the last one she said that she and her family are the victims of the shameless flirtations of her husband. Silvio Berlusconi chooses 'Misses' to join his government, lately. This post is about the question: Do they match? The answer is NO. So why did they get married? And stay married...
Yes, he impressed her (his Pluto is conjunct her Sun in the seventh house). And: he gave her children (his Mars conjunct her Jupiter). His Moon is trine her Midheaven and his Jupiter is parallel her Ascendant. Those are pleasant indications for supporting her and caring for her position in life. But generally: they don't make a match.

Those signs are not naturally understanding each other. See the post about matching signs.... The good thing is that those conflicting positions don't make hard aspects because the orb is too wide.

TO DIVORCE OR TO STAY MARRIED
With so many NOT matching signs, one wonders what brought them together and why they don't divorce. His chart is reflecting a slight potential for divorce (Moon in Pisces in a wide opposition Neptune). Her chart no potential for divorce, but is reflecting upheavel and 'flashlight' in the relationship (Uranus in the seventh house, semisesquisquare Sun/Moon). Does that mean that they have to stay married till ever after, even though they don't match? Perhaps, because they are Roman Catholics. They may not live in one house (and that is very possible with conflicting Moons), but they won't easily get divorced. Besides: on cusp 7 (the house of marriage) Berlusconi has Taurus (and that is one of the signs involved in the pattern of long lasting relationships, see that post).

WHAT THEY SHARE
Sometimes people are involved because they share the same kind of ideas, ways of life, experiences or goals, symbolized by having the same (kind of) aspects between two planets or lights. I have written about that on Astromarkt.
Let us have a look at the aspects to see what they share. They share:

Sun conjunct Mercury (for subjective ideas and thinking of themselves)
Moon in aspect with Neptune (she has Moon sextile Neptune; for romantic/idealistic needs or habits or being sensitive and empathic for each other)
Venus in aspect with Mars (for passion)
Ascendant in aspect with Ceres (he sextile, she square)

STRONG CONNECTIONS IN MIDPOINTS
How is it possible that those aspects kept them together? Ceres! I will explain that later in this post. And:

That means that love is above all uniting them and that there is a very strong crucial and powerful connection. It would be hard, if not impossible, to finish this marriage. The midpoint connection of her Sun/Moon with four of his positions shows that he represents family life in her eyes in more than one way.

CERES
Charts should always been read with the cultural backgrounds in mind. But in this case there is even more reason to do so. They both have Ceres in aspect with the Ascendant. Roots, genes and the basics of life (nurture for example) are very important for them. Her Ceres, the symbol of motherly love, is at a crucial spot in the chart, below. All that Ceres symbolizes may have been the cement that kept them together. I think tradition is one of those items.

This time however, there are difficulties for both.

SEPARATING TIMES
Lately Veronica had transit Saturn square her progressed Sun. She will have another transit of Saturn this summer. She also has transit Pluto is square her progressed Ascendant. Transit Neptune is inconjunct her Sun and Mercury. It is obvious that she is not in most favorable circumstances. She is down, depressed and ashamed. She means what she writes. Saturn's transit might even cause separation and distance.
But there is good news for her. The progressed Moon and Midheaven are to make aspects with Jupiter this year and progressed Venus is soon to be conjunct Uranus. Perhaps that brings her luck or fun.

It is clear that people can have long lasting relationships even if they don't really seem to 'match'. Sometimes people have other reasons to get 'connected'. I like the quintile between her Mercury and his...She sure found a creative way to communicate with the owner of so many newspapers: in a public paper that he does not own:).

RELATED:
Another post about Berlusconi (and Mercury inconjunct Uranus for disproportionate upheavel): http://astropost.blogspot.com/2009/04/chart-of-silvio-berlusconi-mercury.html