Tsuyoshi Kusanagi was arrested last Thursday for being drunk and naked in a park. He says he is very ashamed. Tsuyoshi Kusanagi is an actor and a member of the popular band SMAP. He also likes to be part of culinary programs on television and speaks Korean, fluently. I don't know his hour of birth. He was born July 9, 1974 and is now 34.

SATURN RISING BEFORE THE SUN
One of the comments coming from a journalist was very accurate. He said that he was surprised, because the artist always seemed so serious. And yes, he IS serious. On July 9, 1974 Saturn rises before his Sun. Those who are born on that day are first of all ambitious, neat, trying to be decent and proper like their parents told him to do. Or like the laws want them to.

But who can resist the call of Uranus?:) Uranus does not make any Ptolemaic aspects in sign or orb 5 degrees on July 9, 1974. And Uranus is the symbol of rebellion, upheavel and media hypes. He sure caused one! See YouTube about the media hype.


THE ISSUE OF RESTRICTED FREEDOM
Saturn and Uranus are both prominent and the conflict between restriction and independency is clear. The Sun is semi square the midpoint Saturn/Uranus. The combination of Saturn and Uranus reflects the theme of restricted freedom. It is an issue in his chart. Another journalist mentioned that he felt pity for the singer who's popularity made his life so difficult.

More about Saturn-Uranus on this blog...

ALCOHOL
Notice that the Moon in Pisces is square Neptune. Sign and aspect are part of the astrological pattern of artistic talents. The aspect also symbolizes the need to escape (sometimes by means of drugs or alcohol). With the Sun in Cancer and Moon in Pisces the Moon and Neptune are the rulers of the lights.
50% of his positions are in water signs, the signs that 'go with the flow'.

SUCCESS
Another explanation for what happened is the combination of success made by Mars inconjunct Jupiter and semi square Pluto. The inconjunction shows the disproportionate success, the misbalance (to succeed, but...)
(His Sun trine Jupiter is telling us about self confidence and the ability to make life a success and that he is an international - from now on:) 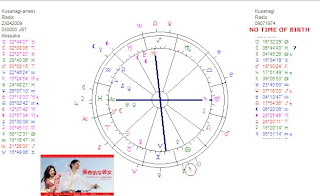 ARREST
There is no hour of birth available. Here is the chart for the moment of the arrest. Notice that the Ascendant (of the moment) was conjunct the Ceres of the popular artist, opposition Saturn. Progressed (retrograding) Jupiter was conjunct the Ascendant of the moment. It is food for thought. I had not heard of him before this happened. But now he is famous all over the world. I don't know if that helps him. Even a Japanese minister expressed his anger over the event.

SATURN-CERES
Culture and costumes (...sic) are a very important part of the reading of a chart. Ceres might be symbolizing the very important rites, roots and costumes of Japan. Dignitiy is also very important in Japan. But Ceres is also the symbol of 'Mother Nature'. So Saturn opposition Ceres is reflecting the question (opposition) of dignity (Saturn) and Mother Nature (Ceres).
The consequences might be rather disproportionate in my eyes. But in the eyes of the older generation of Japan the pop star lost his dignity. Perhaps that is another way to read Saturn opposition Ceres. He is also being payed by the government (Saturn!) and now he lost the job.

As Tsuyoshi Kusanagi loves culinary programs I think that Ceres (symbol of nutrition, too) is located on an important spot in the chart and is just as important as his oriental Saturn. That explanes why the transit and the event were so important. When the Ascendant was conjunct his Ceres (already in opposition with Saturn) the situation (Ascendant) was related to his nude act.