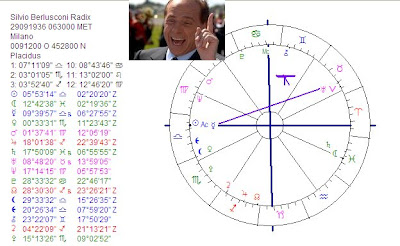 He says so much, because Mercury is conjunct his Ascendant.
I remember the fuss he made by saying to an ex-model that he would have married her if he had not been married already. His wife demanded a public excuse and he gave it. But he also appointed the ex-model as a minister in his government. Her ministry: 'Equal chances':) His remark about the sunny colour of Obama was not appreciated, too. Today he said another wrong thing, perhaps meant as a comfort. He wanted perhaps to comfort the people in Mid-Italy who have to sleep in tents as their houses are either destroyed or dangerous. He said that the best thing to do for them right now was to pretend that they were at a camping for holidays.

The inconjunction is the symbol of what lacks balance, is misplaced or uneven. And when Uranus is involved, you tend to say things too soon (sometimes without thinking). Or making fun when that is shocking considering the situation. 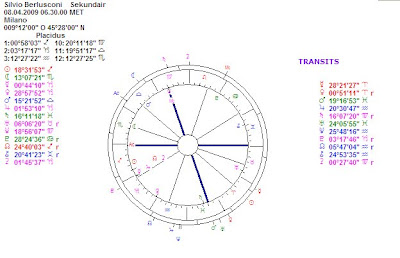 Today transit Mars is square progressed (or Solar Arc) Sun, too, for being a target. Later this year (in August) the progressed Sun will square Neptune. Usually that is not a fortunate aspect.

But... right now, transit Jupiter is inconjunct progressed Midheaven and that promisses support, also disproportinate. Click 'inconjunction' in the labels to see the post about the effect of the inconjunction and various examples.
Geplaatst door Astromarkt op 7:04 PM