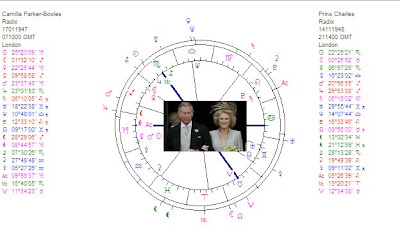 Today Prince Charles met the Pope with transit Jupiter square his Sun. That is a good sign for a trip abroad. And now that I mention him, let us see how he matches with Camilla.

CHARLES
Charles married Diana first. In his chart Venus conjunct Neptune shows the possible divorce. He has Sun/Moon in aspect with Saturn and that is a reflection of breaking up a family in our days (it means: a distant family life).

CAMILLA
Camilla married Mr. Parker first. In her chart Sun is semi sextile Uranus, a weak sign for a divorce. But Sun/Moon is 22.5 degrees from Saturn and from Uranus. Restricted and stirred up family life...

MATCH
I like the way that their charts match.
His Sun is trine hers (within 1.5 degrees)
Their Ascendants are close together,just like their MC's

They can easily join lifes, they share the same kind of approach and goals and as the Moons are in agreeable signs, they are able to live together. There are no conflicts, although the signs of Venus and Mars don't match. There is compensation for that: her Sun/Moon is square his prominent Venus. His love and sympathy have an effect on her family life and is what she wants most of all. How romantic.

Her Descendant is inconjunct his Saturn and that reveals some of the problems. Is "a disproportionate (inconjunct) delay (Saturn) of marriage (Descendant)" a good translation of the astrological message, perhaps?

MORE...
The couple is also mentioned in the article about the moment of meeting the man or woman of your life...on Astromarkt.

I wrote in that article: "In June 1971, during a polo match, Camilla and Charles met for the first time. She had progressed Venus conjunct natal Saturn and semi square progressed Uranus. He had no special progressions at all. Her progressed ascendant is at the time exactly sesqui square his progressed Jupiter.

Sometimes people meet without starting a relationship, yet. A semi square with Venus describes a senseless love. Bernadette Brady refers to semi squares as a 'frustrating not'. Sesqui squares should bring advantages in a later stade! Apparently Charles and Camlla had to marry someone else, first. It is not only for the sort of aspectation that love was not answered at the time. Saturn and Uranus together refer to limitations of freedom and independency. Venus with Uranus often points at falling in love. Saturn is the planet of responsibilities, status and 'timing'. Shall we see this as 'untimely love'?"

For more about the natal chart of Prince Charles:
1. On Astropost...
2. On my site Astromarkt...
3. On Art&Astrology about his talent as a water colour artist...