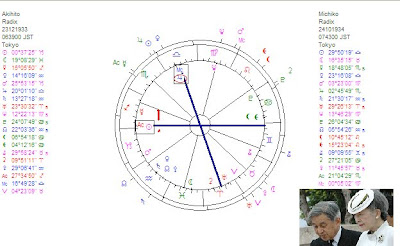 Akihito and Michiko: those are the names of the emperor and empress of Japan. They married 50 years ago.

Of course, emperors don't divorce. Pluto in the 7th house of Akihito shows a 'forced' or challenging marriage, a marriage under pressure. Mars is opposition Pluto in his chart, perhaps showing political sruggles.
He has Venus inconjunct Neptune and Mars square Uranus. Those are two out of the 4 indicational aspects for divorce.
She has Sun opposition Uranus and Venus ruler 7 square Pluto ruler 1: those are indications for divorce as well.
But: emperors don't divorce. They keep sharing a life and...aspects.

SHARED ASPECTS
He has Moon square Mercury, she has Moon opposition Mercury; they very well know how to behave.
He has Mars square Uranus and she has Mars trine Uranus; they might be considered friends, perhaps (they shared a freedom fight against his parents).
He has Venus conjunct Saturn and she has Venus trine Saturn; they share the obligations and feel the restrictions or status of marriage.
They both have Jupiter opposition Uranus; they both have a modern convicton.

For more about sharing aspects with a partner, click here to go to my site Astromarkt...

SYNASTRIE
His Sun is trine her Midheaven. Her Moon is inconjunct his Midheaven. He 'enligthed' her status, his status put her moods and habits out of balance.

AKIHITO
He is leader (Sun without major aspects and placed on the ASC), with above all an international (Jupiter elevated conjunct MC and the first outer planet rising) orientation. With Sun and Jupiter in double prominence the chart shows successful leadership at once.

MICHIKO
She is artistic, sensitive or spitiritual but also a figther and activist. She is communicative and intelligent (Mercury on Ascendant) but she also knows how to pretend (Moon on Descendant). As she has a tight opposition Sun-Uranus, both square Pluto, she is rather radical and revolutionary, perhaps because she had to learn to live with the dramatic changes in life style following her marriage. As a civilian she was 'the stranger' in court for a long long time. Notice the position of Saturn square ASC for ambition and responsibilities, btw. Moon, Mercury, Saturn and Neptune are of importance. She had to live with powerful and pushing parents in law. It is a rumor that she had a nervous breakdown in the early sixties (due to the situation in court).

On January 7, 1989 she became empress with progressed Midheaven opposition progressed Uranus. Her position changed completely...In the solar return chart of that year Uranus was on Midheaven, too (perhaps for freedom at last). It was the day that her father in law,the former emperor, died.

I found the birth data of the Emperor on Astrodatabank and that of the Empress on Astrotheme.fr