The contradictions in the chart of Rudolf Steiner

How to educate children? There are some theories. One of those comes from Rudolph Steiner, born in 1861. Naturally, those theories have to be seen in the light of his days. His theories are in the news in Europe today. A mother in Belgium found out that the Steiner school of her daughter uses corporal punishment for children (and that is forbidden in most Western countries). Her daughter was forced to step up and down the stairs 100 times, for laughing…Other Steiner schools wash mouths with soap after dirty words, make children wear 'big ears' (for not listening) or lock them up in small cabinets. Who would have thought that anthroposophy allowed to hurt other people, however small? This seemingly controversy is reflected in the chart of the founder, that you see here. 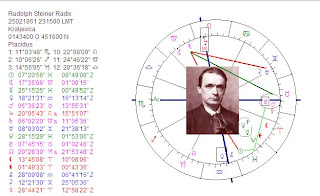 The founder of anthroposophy, the basics of the Steiner schools, is the versatile Rudolf Steiner. He is a famous and controversial person (Sun square Uranus, tightly) for his innovative creative ideas (Mercury quintile Uranus). Here is his chart with the patterns of success, art, 'the die hard' and the issue of limited freedom (let us say...karma). A blog is too short to do a complete reading and explain 'it all'. But a blog is long enough to show the main structure of the person who is a successful artist and visionary, the controversial nature of his ideas and the rather strict and thorny presentation of them (the Scorpio Ascendant opposition Pluto). But first: about educating children and using physical punishment.

CHILDREN
The final dispositor (end ruler) of the Midheaven routing is Neptune (on Scheat) conjunct Mercury in the fifth house of children and (pro-)creation. This locates his professional activities.
The Moon does not make Ptolemaic aspects in sign or orb 5 degrees. I name that a ‘calling Moon’. He had a vocation to educate and to keep memories alive (like actors do). The Moon is strongly related to children and to behaviour. In our early years we learn to 'behave' as we should (according to our family or group).

BEING STRICT
The aspect combinations of Sun and Mars with Saturn and Pluto and the Scorpio Ascendant opposition Pluto strongly contributed to the rather harsh approach. It seems to contradict the opposition of Venus and Jupiter on the meridian. One side of Steiner is tolerant and kind. The other side of Steiner is strict and severe. The same contradiction is being reflected in the policy of educating children with love and arts and punishing them by hurting them or making them look foolish.

CONTRADICTIONS
There are more than one contradictions in his chart. Mercury conjunct Neptune is one. Sun in Pisces and Moon in Virgo is another one. Oppositions like Venus-Jupiter and Sun-Saturn are also indicating contradictions. He combined science and arts, observations and visions.

ASTRO ID
On the angles are Jupiter and Pluto (an indication for his success, even 150 years later) and Venus, planet of the arts. Jupiter conjunct Midheaven is telling us about the way that his career is related to publications. Pluto on the Descendant makes us aware of the influence and power in presentations. I read that he almost never smiled. Also see the picture in the chart for his appearance.

The midpoint ASC/MC is in aspect with Venus and Uranus (arts and 'changing the world'). The midpoint Sun/Moon with Venus (talents) and Jupiter (success, publishing, traveling, spreading the word).

SATURN AND PLUTO COMBINATIONS
Sun is in Pisces, opposition Saturn and sextile Pluto. Mars is conjunct Pluto and trine Saturn. It is easy to see the 'die hard' and the vigorous measures in the way Saturn and Pluto are tightly in aspect with Sun and Mars*). The combinations are not repeated in the midpoint combinations. The issue of unnatural death is not a theme in his life. But Midheaven is semi square Saturn/Pluto and Mars/Saturn...another combination for being strict and perhaps severe.

Steiner has Sun opposition Saturn, tightly. For more about the aspect between Sun and Saturn, see http://astropost.blogspot.com/2009/03/sun-in-aspect-with-saturn-managing-to.html. In that post I give some examples of managers (and dictators) with this aspect, such as Ceausescu (Rumania). This aspect in the hands of a leader in an undemocratic nation or organisation (...) easily leads to total control and one headed management.


Leo is on Midheaven and the final dispositor is Neptune in Pisces, conjunct Mercury, in the 5th house of children. I read this as: an idealistic (Neptune) theory (Mercury) about children (5th house).

SATURN AND URANUS COMBINATIONS
Saturn square Uranus, both in aspect with the Sun, reflect the subject of limited freedom (free will and/or karma***). Saturn and Uranus are not prominent in his chart, so that the issue of restrictions in his chart never resulted in physical limitations (such as a period in jail, for example).

One of Steiner's ideas is that every human being has a 'spiritual free will'. He wrote about it: The Philosophy of Freedom (see Wikipedia and the defense of his theories. The author states: 'Thus, in Anthroposophy there is simply no excuse for harming others." I .wonder how pulling children’s' hairs or ears fits the concept. It is another contradiction…(see above)

MERCURY CONJUNCT NEPTUNE
The final dispositor of the MC, Neptune, is conjunct Mercury. Cafe Astrology describes the conjunction of Mercury and Neptune. It is the aspect that joins facts and fantasy. Also read my blog, where I mention the aspect Mercury-Neptune:
"When you have to invent stories because you are an author, this aspect can be a blessing, but in real life it is not easy. For an example, see the charts of Gerard and Guillaume Depardieu. BTW, Brad Pitt (actor) has Mercury sextile Neptune, tightly. More about Mercury-Neptune on this blog Astropost:
about the Friedman case." (i.e. Mercury inconjunct Pluto)

FOLLOWERS
He has lot of followers. For this you see Jupiter conjunct Midheaven with Neptune final dispositor of Midheaven. Sun and Venus are (in the 22.5 degree range) in aspect with Jupiter/Neptune. Jupiter-Neptune is the combination of devoted listeners and readers that is found in the charts of those who are on stage or have a public like in arts and religion.

ART
Eurhythmy has been developed by Rudolf Steiner. He also was an architect (the Goetheanum). The astrological artistic pattern****) is:

- The Moon is ‘calling’
- Moon inconjunct**) Venus (sense of art, but...)
- Venus opposition Midheaven (style, diplomacy, charm or talents used in a career)
- Neptune in a creative biquintile with Midheaven (using visions or fantasy in a profession)
- Venus 67.5 midpoint Sun/Moon (in heart and soul an artist or talent)
- Venus 135 degrees from ASC/MC (talents of crucial importance)
- Neptune is the final dispositor of Midheaven (career involves arts, or an ideology)
- The final dispositor of Midheaven is in the 5th house of (pro-)creation (and children and games)

PS SCHEAT
The final dispositor of the Midheaven is Neptune. In the days of Steiner, Neptune was conjunct the fixed star Scheat. That doesn't seem to be a good position for the ruler of his 5th house (of children). At least, that is what I read here....http://theastrologypage.blogspot.com/2007/03/oh-sheat.html

PPS Scheat was important in the chart of the troubled genius John Nash (Beautiful Mind). Read this British blog about it: Visual astrology/

*) For more about the effect of Saturn and Pluto, see the article on my site Astromarkt...
**) For the effect of the inconjunction, see the post on this blog...
***) I personally don't believe in guilt or benefits coming from past and unknown lives
****) Dozens of artistic patterns in the charts of artists are on my blog Art & Astrology