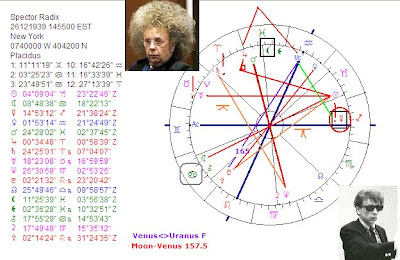 Phil Spector has been found guilty in the case of the murder of Lana Clarkson on February 3, 2003. He is a producer, songwriter and guitar player and he loves to play excentric games with weapons (scaring others). He seems to have 'absolute pitch'. He has over 14 midpoint combinations that show his success~! But his chart also shows a man of extremes, who is likely to get out of balance. Why? In short:

1. He is someone with any possible (not necessarily stable) level of presenting himself and dito status (position in life). The crucial rulers of Ascendant and Midheaven are not aspected ('calling', drifting.._.
2. Communication is of utmost importance, but also without balance and extraordinary. Mercury is angular, rising before the Sun and not making aspects in sign or orb 5 degrees.
3. He has intense feelings (Venus opposition Pluto***)
4. He might use or abuse drugs or medications and be out of balance because of that (Mars inconjunct Neptune)
5. You can see the unique talent related to the career in the mutual reception of Venus and Uranus, the final dispositors of the Midheaven routing.
6. There are three inconjunctions (indications for problems from the start):
- Saturn-Neptune (something ill or depressing),
- Sun-Pluto (a self esteem problem) and
- Mars-Nodes (agressive relations).

This is just a summary of the tightest aspects and the most prominent placement. It shows us a person who may be a unique talent, but who is also unstable and intense. Read on if you want to have more info.

When you look at the AA rated chart provided by Astrodatabank**), you notice:
- Mercury (ruler 1) doesn't make any major aspect in sign or orb 5 degrees, so Mercury is 'calling'. Mercury is also on the Descendant and is rising before the Sun
Mercury is the planet of passive and active communication. Communication is highlighted in this chart threee times. Mercury is also sesquisemisquare Sun/Moon! This man has a message and he is communicating.

Mercury is also ruler of the Ascendant. An unaspected dispositor of the Ascendant might mean that his presentation, way of doing 'it', and the connection to the outside world is unstable and can be at any possible level.

- Saturn (ruler 8) is also 'calling'
Saturn is also inconjunct Neptune. This might point at born illnesses.

- Uranus (ruler Midheaven) also is unaspected
A 'calling' Midheaven points at a career and position in society that can have any possible level. Anything is possible. The placement in the 12th house refers to being the man behind the screens or the scenes. He wrote and published more than that he performed in public.

Saturn and Uranus are prominent in the chart. The restricted freedom (Saturn+Uranus) has been realised by entering prison. Mercury with Saturn and Uranus restricts freedom of speech and communications.

- Mars is tightly inconjunct Neptune
This means that there is little balance in using or abusing medication, drugs, alcohol or fantasy.

- Venus is in mutual reception with Uranus and they are final dispositors of Midheaven
He has sense of rhythm and modern art and was unique (Aquarius Midheaven), changing the world of pop.

- Venus is opposition Pluto
Read the article on Astromarkt about this aspect. This aspect intensifies feelings, sympathies and antipathies.

MURDER
And then he killed a woman, the judge says...Mars/Saturn is in aspect with Moon and Venus. Black Moon Lilith on top is maybe significant enough? I don't know. Nobody is born to be a killer. Or should be...

*)(Perhaps he communicated in business (in his music) but he was unable to have normal social contacts.)

***) For more about Venus-Pluto, read my site Astromarkt.net