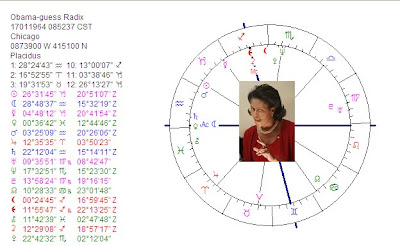 I agree with Cafe Astrology about the importance of Sun/Moon midpoint in relationships. My husband's Sun is exactly square my Sun/Moon, for example.

When I was looking at the relationship between the charts of the Obamas, I thought of that.
Now say that Michelle Obama's Moon is on her Ascendant, opposition Venus of Barack Obama. That would make her Sun/Moon midpoint opposition his Sun. And the Saturn-Uranus inconjunction in his chart, connected with her Sun, would be mirrored by the combination of Sun in Capricorn (ruled by Saturn) and Moon in Aquarius (ruled by Uranus).

This results in an hour of birth of about 8:52 a.m. It would place Ceres on the Midheaven, and does not this suite a first lady (a female icon)? Her special style and fashion is already famous. In the chart above Moon and Venus are on the Ascendant to illustrate the importance of sense of style, art and good manners.

It remains speculation, of course...But with this chart (or any chart half an hour sooner or later) Barack Obama and Michelle would share the aspect Moon-Jupiter (for a need for success and a lot of popularity). He has the trine and she has the semi square.
And...they married in October 1992. With this hour of birth she would have Ascendant conjunct Jupiter in the progressed chart for her wedding day. And Jupiter is the planet for a celebration.
And...in 1998 they had their first daughter. That was with Moon on the IC of her solar return chart (for a changing status, for becoming a mother).


PS I have written about Michelle's spirituality before, see this link.

Angelina Jolie and Madonna are also female icons with Ceres angular. See the post about their adoptions.