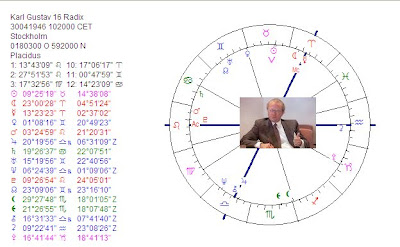 The Swedisch king (konung) Carl Gustav has stated that he wants to reign until he dies and that is a long time from now (since his ancestors lived long lives). With 80% of his placements in fire or air signs he might live just as long (see 'Old' on my site Astromarkt). He is expressive and not holding back emotions.

His Astro I.D. fits a king:
- elevated Sun (leadership, drawing attention, being in the center)
- Ceres on the Descendant for the importance of succession (genes, roots)
- Jupiter oppositiion Midheaven: travelling, success
- Moon rising before the Sun (being 'involved' or ...popular)

And he has a 'royal' Ascendant: Leo!

There is an explanation for his wish to continue his 'job' until death. Just like football coache he has an aspect between Sun and Pluto. That means that he wants to win and dominate (very much, it is a square). This square is in fixed signs, the signs of strong will and perseverance. Sun-Pluto aspects are for fanatics!:)