Neptune and the chart of Farrah Fawcett 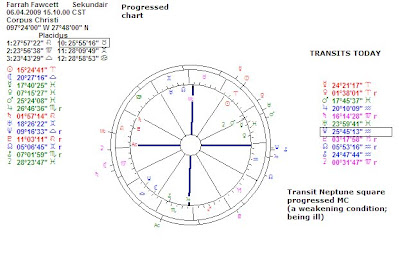 - transit Saturn inconjunct Mars (disproportionate halt to energy); Mars is in the eight house square Saturn in her natal chart.

Often,when there are 3 inconjunctions in transit at the time, there is an unpleasant situation.

INCONJUNCTION
The inconjunction in general refers to losing, loss and sometimes (like in this case) to illnesses. In the natal chart there is only one inconjunction: between Moon and Mars. Mars is another prominent planet in her chart. Mars is the planet of orientation (rising before the Sun) and in the 8th house, in opposition with Saturn. And the Moon is very important,too. The Moon is on the Ascendant, in Cancer and not making Ptolemaic aspects. The Moon in Cancer has the most important position in her chart. So, Moon inconjunct Mars is a very important aspect in her chart, relating the ruler of the Ascendant and an important planet in the 8th house of crisis.

NEPTUNE
Mid-May 2007 she heard that the cancer, that was supposed to be in remission after treatment, had recurred. Now that she is in hospital transit Neptune is square the progressed Midheaven. Neptune symbolises weakness or being ill (a negative or isolated - Neptune - condition - Midheaven*). Neptune rules her natal Midheaven and is positioned at the lowest spot of the chart, a crucial position.

There is also a growing opposition between the Sun and Neptune in the primary chart, culminating in the first half of June.

For the pattern of artistic talent and for her natal chart, see my blog Art&Astrology

*) For example: when a person is in hospital he/she is in an isolated position.