Chart of Nadya Suleman (and progressions) 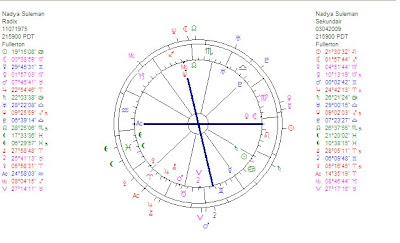 It has taken me some time to read the chart of Nadya Suleman for the date of birth 11 July 1975 (Fullerton) at 21h59 (source is Astrodatabank, A rating, BC in hand). I started to read her chart before, using a wrong date coming from Wikipedia (also mentioning Astrodatabank as the source) and then I didn't have an HOB. I just had Sun afflicted by Jupiter. Coincidence: in the chart with A rating, the Sun is also afflicted by Jupiter. So that was a good reason to wait.
I also wanted to wait a few weeks to see if another d.o.b. would turn up again.
And I wanted to take a long look before I started to mention possible indications for the amount of children of the octuplet mom (who now has 14 children). You see, it is such a special case and at first sight the chart seems so 'normal'. More people are born on that day, so it would be too easy to read it quickly, like this: Sun conjunct Saturn = being responsible or a parent. Sun and Saturn square Jupiter = wanting more and more of thát responsibility.

It would also have been too easy to only blame Mars (not making Ptolemaic aspects and inconjunct Midheaven and in Taurus) for being productive in a disproportionate and stubborn way, at any kind of level. Mars without major aspects in sign or orb 5 degrees is the symbol of the workaholic and overproduction.

CERES
But, those two indications of abundance together with the position of Ceres (Mother Nature) square Ascendant (down under in the chart) say a lot. Genes and seeds are of crucial importance (Ceres square ASC). The position of Ceres is strongly related to the specific place and hour of birth of Nadya Suleman. It is an individual position.
Ceres is important in the natal chart. And Ceres became even more important in the progressed chart. Progressed Ceres was opposition natal MC: her position in society was strongly related to motherhood, genes, roots and seeds.

Now we have overproductivity and the importance of genes and seeds. There is also procreativity and success in this chart.

BEING (PRO-)CREATIVE
Neptune on Midheaven and Moon conjunct Venus reveals some kind of artistic or creative talent. And let us be honest...having children is pro-creating. The Sun in the 5th wants to be a performer, to show off and to be in the centre of attention. And she is! Perhaps she could have demonstrated artistic or creative talents in a different way if she grew up in different circumstances, who knows...
The positions of Neptune and Moon are for this moment and place of birth only.

The Moon is in the 7th house (like in the song:). The Moon is the ruler of the Sun and is displaying the need for company and the desire to serve. Another important fact is that she is a person with a passion (Venus and Mars related to ASC/MC in the 22.5 degree range).
And last but not least: Sun quintile Mars for being creative in the process of producing....

SUCCESS
People may differ in opinion about what is success. In the old days having a lot of children WAS the symbol of success (if you could afford them... of course). In some parts of the world, the amount of descendants is an important figure for status. And when people become a 100 years old, they are named with the number of their children, grandchildren, great grandchildren etc. For a lot of people in the world creating a family and having many descendants is a matter of succes.

JUPITER-PLUTO (the awful lot of ...)
Nadya Suleman had the wish to establish a big family, since she was a teenager. She succeeded in that. Moon and Mars (production of family?) are involved in midpoint combinations with Jupiter and Pluto. The Jupiter-Pluto combination is often prominent in the charts of people with succes. But in fact, it just means that there is a big amount of...popularity (Moon), productivity and drive (Mars), sympathy and money (Venus), attention (Sun) or status (MC). In the chart of Nadya Suleman we see:

CONCLUSION
Together (Moon and Mars in hard aspect with Jupiter/Pluto), Ceres crucial position and the inconjunctions of the 'calling' Mars:
being very successful in producing family with passion and a disproportinate drive; genes or seeds are of crucial importance.
(Could I have read the chart like this when she was still a little baby, I wonder? It is always easier to relate the chart to the lady instead of vice versa:)

NEGATIVE SIDE
The possible negative side of this is shown by:
- Saturn in the middle of Mars and Pluto, conjunct Sun in 5 and Mars-Saturn, Mars-Pluto and Saturn-Pluto are connected by minor aspects, too. It is a dangerous combination often related to unnatural death. So it is rather strange to see this in the house of procreation.
- Neptune on Midheaven in Sagittarius, both inconjunct Mars and sextile Pluto could be seen as the discrete or secret ('magic') position of the males involved. The inconjunctions might refer to losing her children (perhaps to the authorities).

REALIZING DREAMS: NEPTUNE
The Midheaven conjunct Neptune makes us aware of the realization of her dreams, of a career going hand in hand with ideals, illusions and romance. And yes, she did it. In that sense, she is a success in her own eyes. Jupiter is in the 2nd house. She had a house, she has money, and she has help (because of the number of her children. If she had been a single mom of 3 or 4 she would have had worse circumstances, in particular right now with the financial crisis going on. But how about the future of her children?

For more info and examples, see the labels.

I recently came accross your blog and have been reading along. I thought I would leave my first comment. I dont know what to say except that I have enjoyed reading. Nice blog. I will keep visiting this blog very often.