The man who drove the car that hit the public on Queen's Day in Apeldoorn today, had transit Saturn opposition natal Sun today (if this 38-year old was born March 6, 1971, as is being 'twittered'). A neighbour told the police that he had debts after losing his job and that he would have to leave his house coming Friday.

SATURN'S EFFECT
In bad circumstances a transit of Saturn may have a very nasty effect. Here is the chart of the moment (some time around 11u50) with the positions of Crown Prince William Alexander on the outside. There is a hit between transit Mars and natal Saturn and the Midheaven is conjunct his Black Moon. 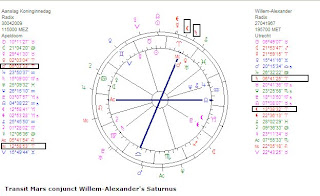 Noone of the Royal Family was hurt physically, but as they saw what happened, they were of course sad and shocked on what is usually a happy day. Also: they were the target today...

The combination of Mars and Saturn often indicates 'end of energy, blocked energy' or death (not always the death of the person with the aspect, but 'death' or 'being struck' as an issue on the day of the transit.