Uranus and the chart of Abhisit Vejjiajiva (Thailand) 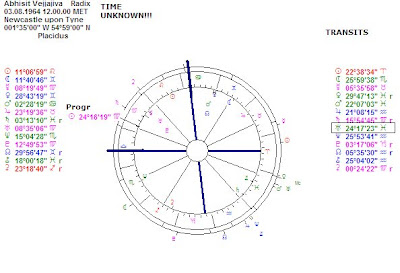 Yesterday there were riots and protests in Bangkok and the prime minister had to hurry to be safe. Today the government announced the state of emergency. Transit Uranus is opposition the progressed Sun of the Prime Minister. Translated: a hectic situation of change (Uranus) initiated by others (opposition).

Above you see the positions of the day of birth of the man who is the centre of the protests: Abhisit Vejjiajiva. His progressed Sun is in the 25th degree of Virgo, straight opposition Uranus (today in the 25th of Pisces). Uranus is the symbol of revolution, change, alarm and upheavel.

The progressions*) and transits of the chart of a leading figure in a nation don't only reflect the personal position and situation. The chart of the leader also mirrors the actual situation of the nation.

Note: Vejjiajiva has Sun square Neptune, 4 degrees apart, just like Obama. Obviously the aspect doesn't give a clue about being popular or not:)