Rasmussen and the dislocated shoulder

Some more about Anders Fogh Rasmussen (and thank you for the info, Behiye!):

In the early hours of 6 April (03.00 am) mr. Rasmussen had an accident in his hotel suit, falling down and injuring his shoulder. He was taken to the hospital, had to be anesthesised and his dislocated right arm was reset. He did attend the meeting with his bandaged arm.

The first aspect that I found and that reflected the accident, was transit Uranus inconjunct Neptune. It was a tight, exact aspect, often related to being unconscious. Maybe he was sleepy (it was in the middle of the night) and that caused the incident. What I like about this aspect is the inconjunction. A dislocated arm...perfectly reflected by the inconjunction. The inconjunction has the meaning of 'misbalance'! And you need to be out of balance to fall down.
Another transit for the timing is the transit Sun square Uranus (for a hectic day).


SATURN
Saturn is usually the planet involved when a person falls down. I have seen many cases with Saturn on the Descendant, for example. And I see the Saturn of Erdogan, conjunct the Ascendant of Rasmussen. Uhm....Maybe it means that the fall joined them (LOL:). I hear that afterwards Erdogán showed his concern and was friendly.
But I also see Mars square the progressed Ascendant. Mars hurts! And Mars was opposition Saturn this weekend. That opposition seems to have activated the positions of his progressed Mars and Saturn on the meridian.

There is the fall and the injury. There are 3 possible indications (a hectic day, being out of balance and getting hurt). And that is all that an accident needs... Here is the proof: the progressed chart with transits. 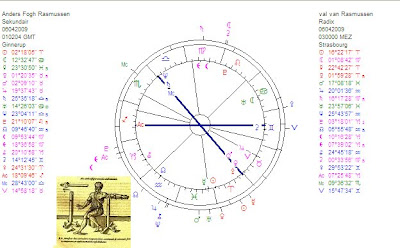 About the daily motions of the Sun and the solar transits with your chart: http://www.astromarkt.net/artsolartransits.htm